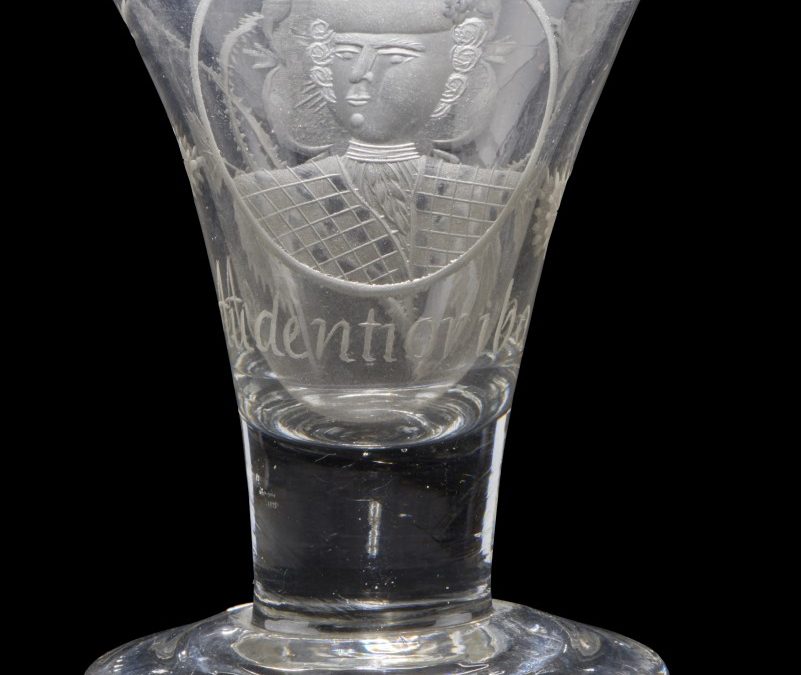 Our Object of the Month for December is this engraved glass which was used by Jacobites to drink to the health of the Stuart family. The Jacobites were the supporters of the Stuarts and their claim to the throne of England. ‘Jacobite’ comes from the Latin name of James II, who went into exile in the late 17th century, ending the reign of the Stuarts. At secret gatherings and dinners, Jacobites would toast with glasses decorated in symbols showing their loyalty. Their hope was that one day the Stuart dynasty would be restored to power.

Owning a glass with Jacobite symbols was a secret way to show loyalty - support of the Stuart family was considered treason. Many glasses, including our object of the month, were decorated with a white rose which was a symbol of the exiled King. Two rosebuds represented the two sons of the Stuart heir James Francis Stuart – Charles Edward and Henry Benedict. The rosebud representing Charles Edward Stuart, James’ heir, is usually depicted as open. 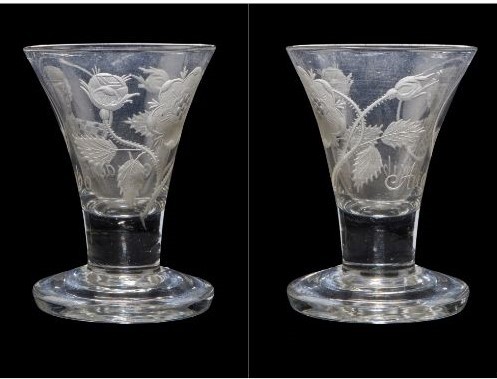 Our glass also has the inscription ‘audentior ibo’ on it, which was a key Jacobite motto. It means ‘go with great daring’ in Latin, encouraging Jacobites to be brave and fight for what they believed in. Other popular mottos included ‘fiat’ (‘may it be’), and ‘redeat’ (‘he will return’). ‘Audentior ibo’ is engraved on our glass underneath a portrait of Charles Edward Stuart, who in 1745 led a rebellion with an army of Scottish highlanders. He attempted to march to London to claim the throne for his family. Although his attempt was unsuccessful, it became a romantic symbol of the bravery of the Jacobites and their fight to reclaim power for the Stuarts. Our glass shows commitment to the Stuart cause openly with a portrait, rather than only hinting at it with secret symbols. 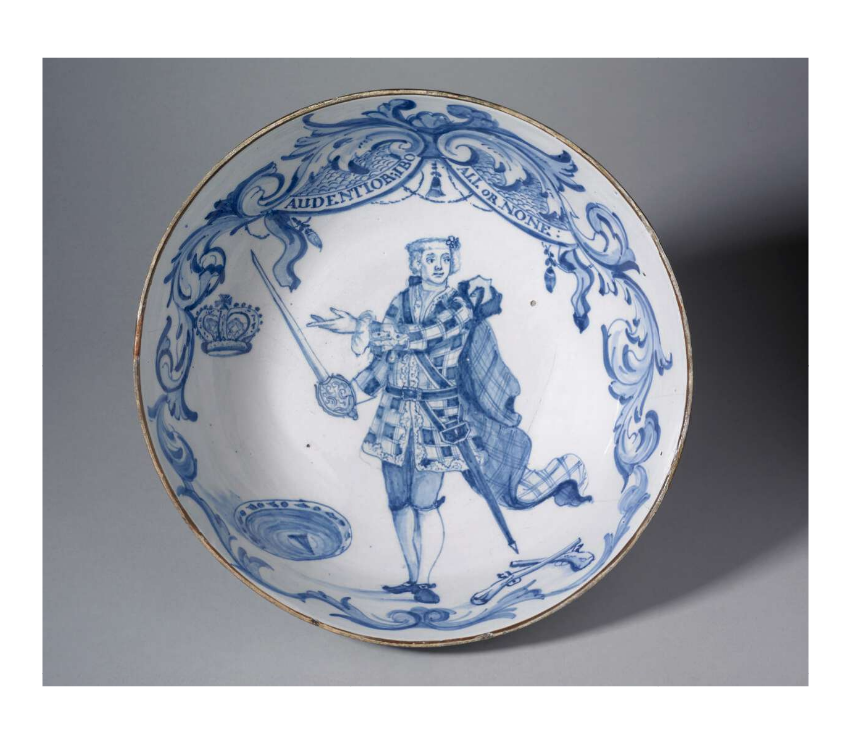 Punch bowl with the motto ‘audentior ibo’ above a portrait of Charles Edward Stuart in highlander dress with a sword and crown, British Museum, museum number 1890,1210.1

Jacobite glasses were designed to be sturdy with thick bases so that they could survive enthusiastic toasting. They were, however, also often smashed after use so that their owners could avoid discovery. This makes it all the more impressive that some have survived until today. At Jacobite dinners and gatherings, toasts would be made ‘to the King over the water’, referring to James II exile in Europe. They would also toast to ‘the little gentleman in the black velvet waistcoat’. This was in honour of the mole whose hill King William III’s horse stumbled over, injuring him and leading to his death. William III became King after James II fled to France, and was considered by the Jacobites to be an imposter.

The collector of this glass and the last private owner of the Castle, Denys Eyre Bower, belonged to the Royal Stuart Society. Denys grew up in Derbyshire, a key area for the 1745 rebellion. Denys was fascinated by the romantic tales of the Jacobites, and amassed a large collection of papers, letters, and objects related to them.

Denys would have had the opportunity to experience traditional toasts at the Royal Stuart Society dinners. The society was an important part of his life. Whilst he was in prison from 1957 – 1962 he entrusted the care of the Castle to some of his friends from the society. They were also rather eccentric and included ‘Major Keir’ who claimed he saw ghosts around the Castle and grounds.