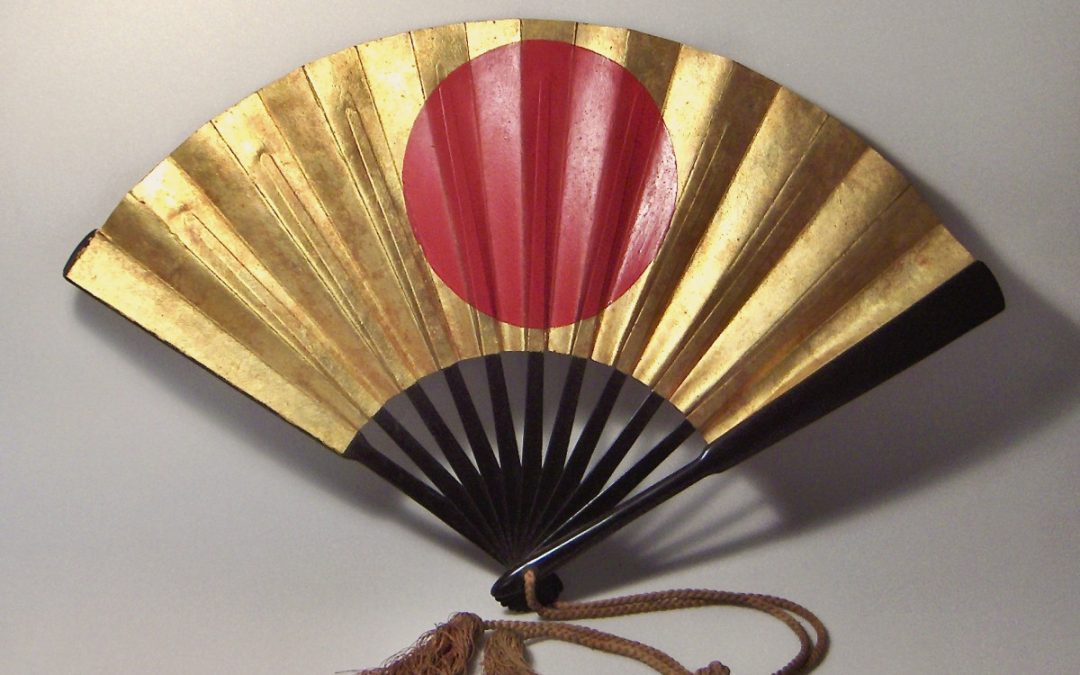 In premodern Japan, fans were used in daily life for keeping cool in the summer as well as for traditional dance performances. They were a key accessory, usually worn tucked into the obi belt worn by both men and women over their kimono. A luxurious fan would be a symbol of the wealth and taste of the owner, and a fan with a poem painted on it in beautiful calligraphy could be used to communicate a message. In ancient Japan, the use of fans was restricted only to the upper classes. Famous painters and woodblock print artists would design fans and they would sometimes be used as decorative objects. 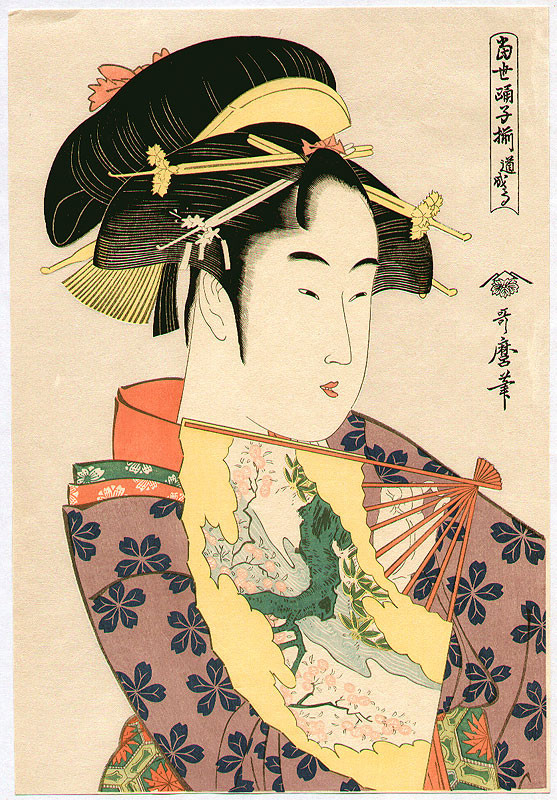 This fan, however, was made for a different purpose. It is a war fan, designed to be carried by a samurai warrior and often used for signalling during battle. As well as being skilled warriors, the samurai were one of the highest classes in society. They demonstrated this through their artistic accomplishments and fashion sense. Unlike painted or printed fans for use in daily life or for dance, this fan has a bold, striking design which would stand out on the battlefield. The hinomaru, or sun-disk is shown in red on a gold-leaf ground on one side, and in gold on a red ground on the other.

The frame of this fan is made from black lacquered wood, but war fans were also sometimes made with iron frames so that they could even be used to block an attacker’s sword. In social and formal situations in which the samurai were not permitted to carry their swords, for example when visiting someone’s home, an iron fan carried as a fashionable accessory could be used as a last-resort defence. 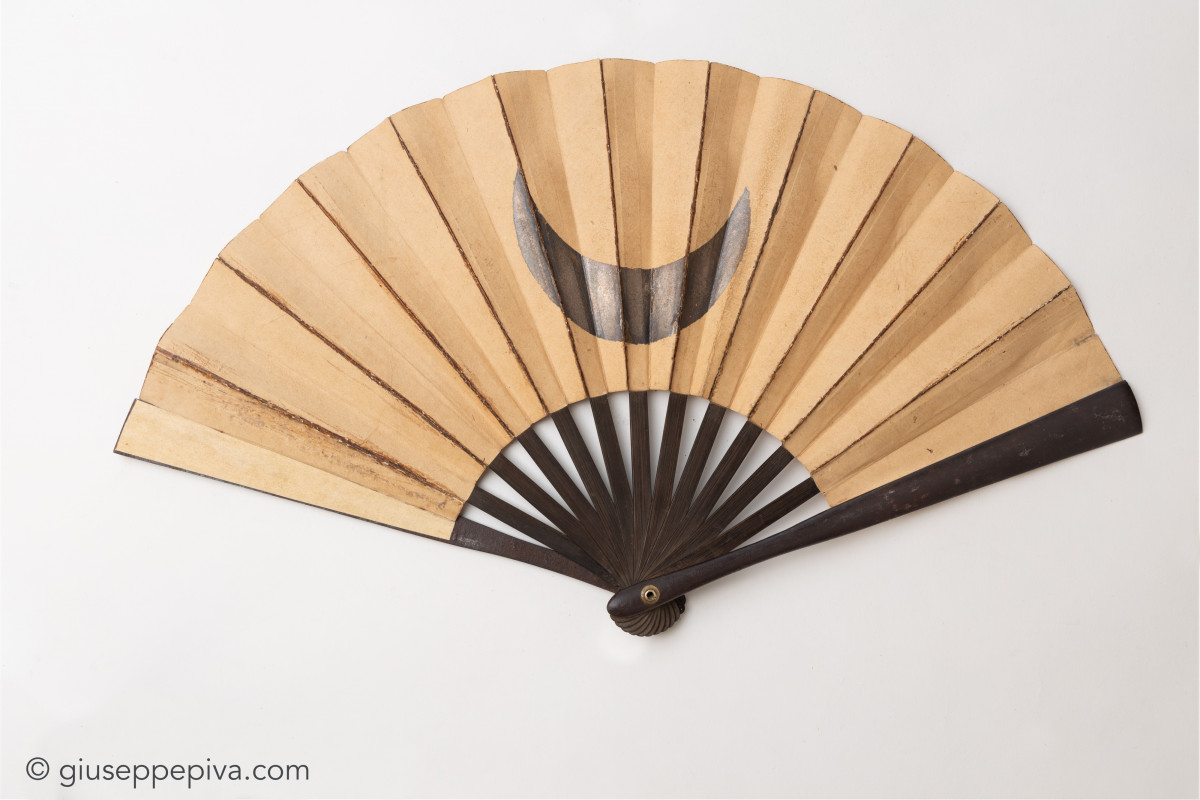 The hinomaru sun disk eventually became the symbol on the Japanese national flag. The red sun on a white background was chosen in the late 19th century as the national emblem, at a time when Japan’s interaction and exchange with Western nations had dramatically increased. The word in Japanese for Japan, Nihon, means ‘the sun’s origin’. In the early 7th century, the newly-developed Japanese government sent a message to the Emperor in China with the following famous and rather defiant phrase -

This, along with the traditional belief in the sun-goddess Amaterasu, is believed to be the origin of the name Nihon, ‘the sun’s origin’, for Japan.

Opening of Tokyo Daiichi University, Kuniteru Utagawa II, 1888, woodblock print, Art Gallery of Greater Victoria, object number 2006.007.006 a-c
In the late Edo - early Meiji period when this fan was made, the samurai warriors based their image on the heroic warriors of the 12th and 13th centuries. This was a time when epic battles resulted in the first period of warlord rule in Japan. The famous classical text, the Tale of Heike, describes the events of the Genpei Wars (1180 - 1185). A heroic clash between two opposing samurai warriors from this tale features a war fan. At the seaside battle of Ichi-no-Tani, the warrior Kumagai Naozane spots an enemy warrior fleeing into the sea on horseback. He uses his fan to signal the warrior and calls him to come and fight. Having defeated him, Kumagai is filled with regret as he realises it is the young musician nobleman Taira no Atsumori. 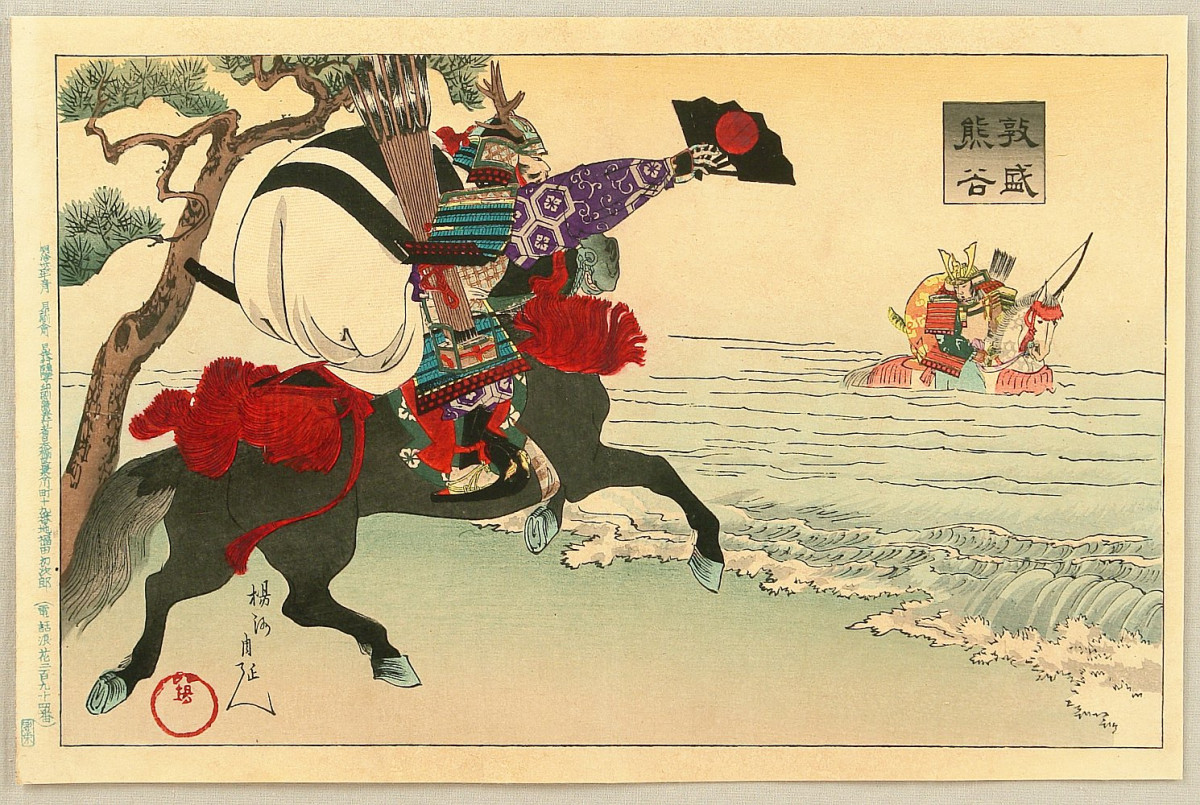 Our Object of the Month is currently on display in the Castle’s Japanese Room, alongside samurai suits of armour, swords, and helmets. On Sunday the 29th of August we are holding a Japan Festival in celebration of Japanese culture, traditions, and the collections. There will be demonstrations of samurai martial arts including traditional archery and sword techniques. There will also be traditional Japanese dance performances along with music, tea ceremony, calligraphy, displays, talks, and more. We hope you will join us to view this month’s object, the rest of the collection, and to experience Japanese culture and art in the Kentish countryside.