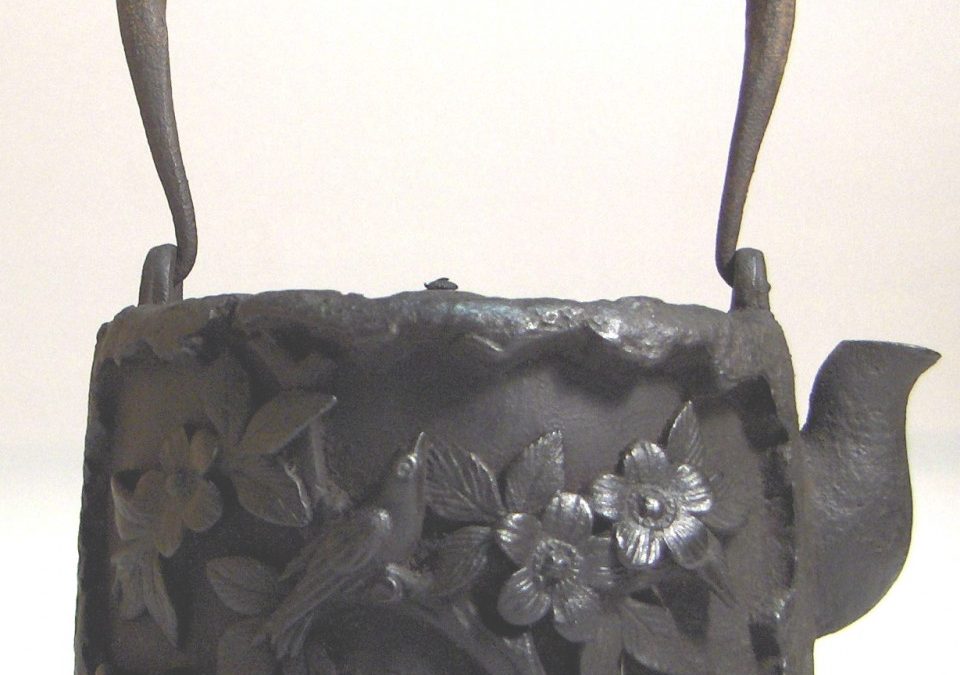 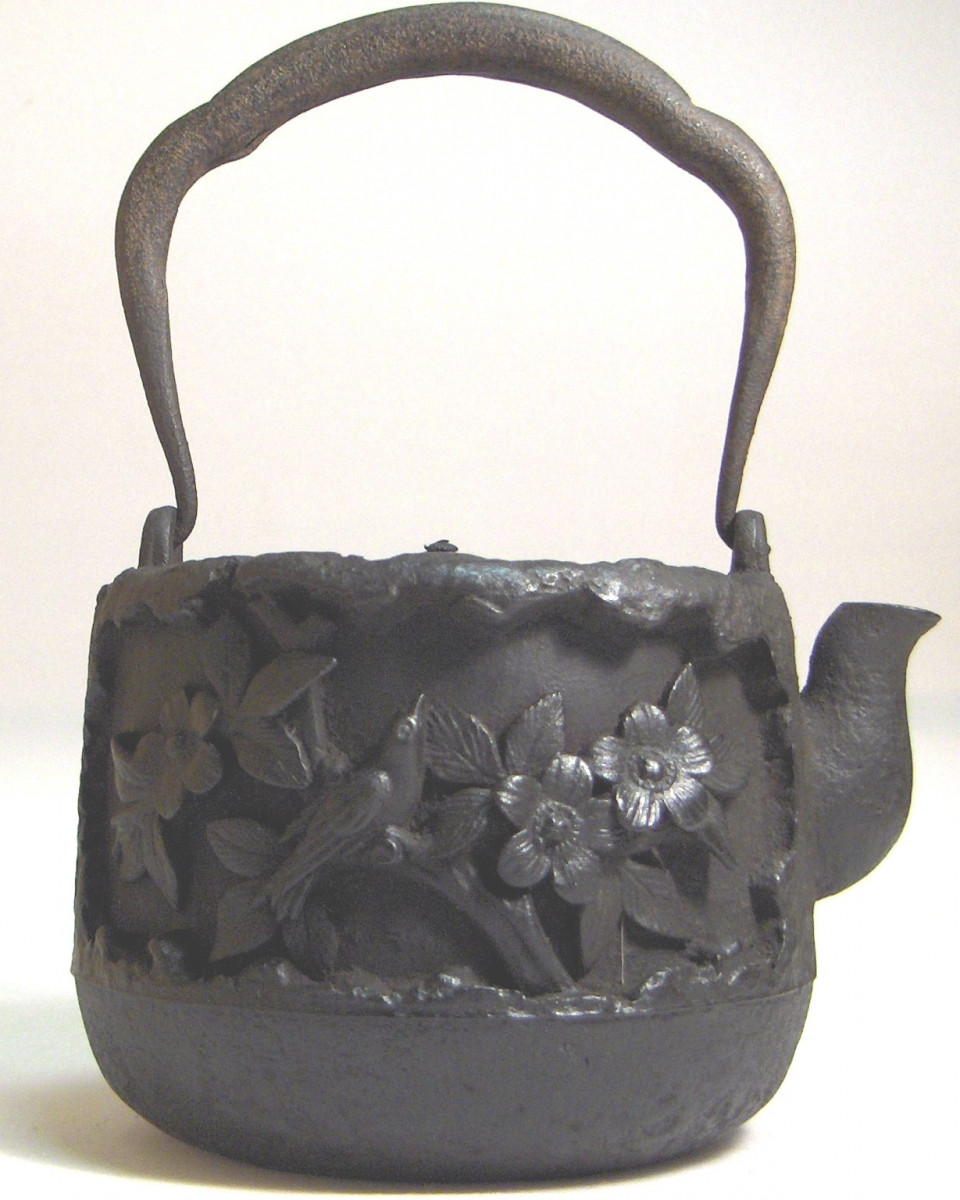 Decorated with a carved design of cherry blossoms and birds, this Japanese iron teapot is perfect for Spring. Iron tea kettles like this one were used to heat water for tea over a brazier. Smaller decorative tea kettles with handles would have been used for informal occasions or for making tea outdoors, for example whilst traveling. The tall iron handle, which could be detached, would be used to hang the tea kettle over a fire or brazier. In the woodblock print below, two travellers can be seen stoking a fire with a tea kettle hanging over it, attached to a tree branch. 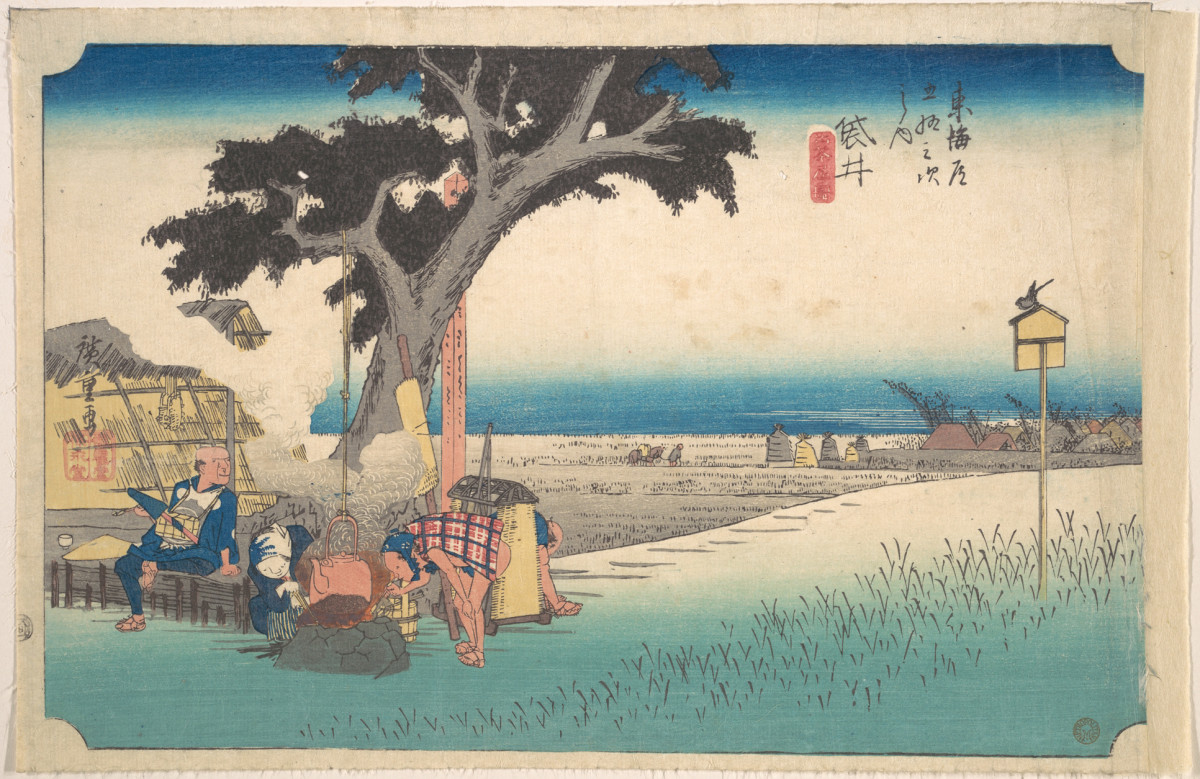 Tea drinking is said to have been introduced to Japan from China in the 8th century. This was a period when Japanese Buddhist monks were regularly travelling to China to bring back Buddhist texts and knowledge. Tea was popular with Buddhist monks as it helped them stay awake during meditation. Tea drinking, along with collecting highly prized tea utensils, became popular amongst the upper classes. In the 16th century, the influential tea master Sen no Rikyu (1522 – 1591) developed a set of ideas and practices that defined the Japanese ‘tea ceremony’, chanoyu, as it is known today.

The tea ceremony is a gathering at which the order of events, the utensils, the setting, and the preparation of the tea all carefully follow certain rules and techniques. Every detail is planned and executed by the host. For example, an exact amount and arrangement of charcoal is used so that the guests can appreciate the sound of the steam and boiling water in the kettle throughout the stages of the ceremony. 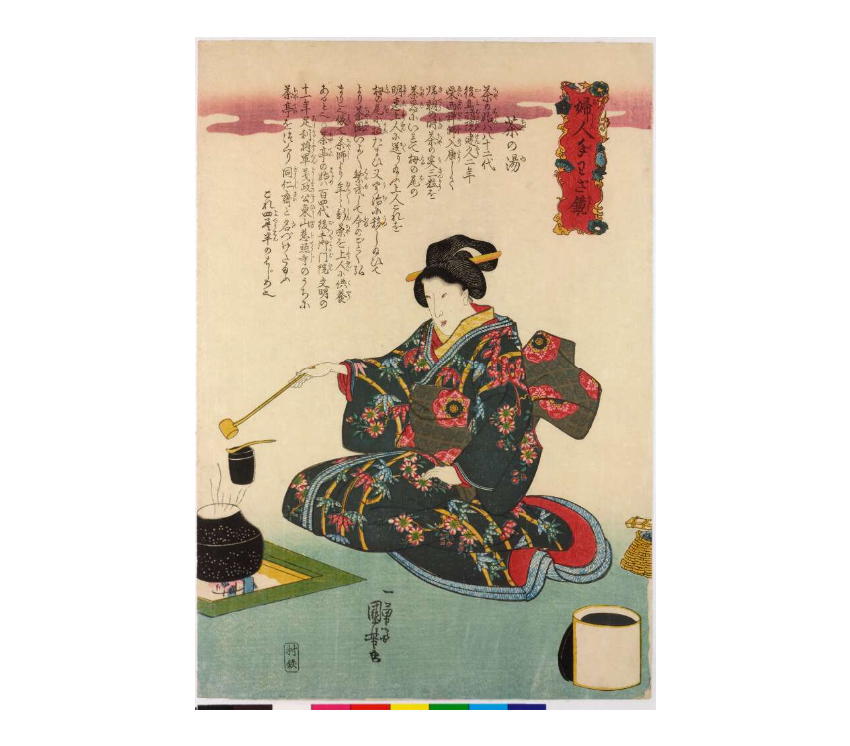 The utensils, floral arrangement, and food served at a tea ceremony will all be chosen to reflect the season. The choice of tea utensils is particularly important. Some tea utensils even became famous (meibutsu) because they were appreciated or used by important figures. Meibutsu were often chosen because they reflected the aesthetic of wabi that Sen no Rikyu introduced. Wabi referred to things that are worn, plain, simple, and imperfect. The simple tearoom, the plain tea bowls and bamboo tea scoops, and the works of art and flowers on display were all considered to be wabi. 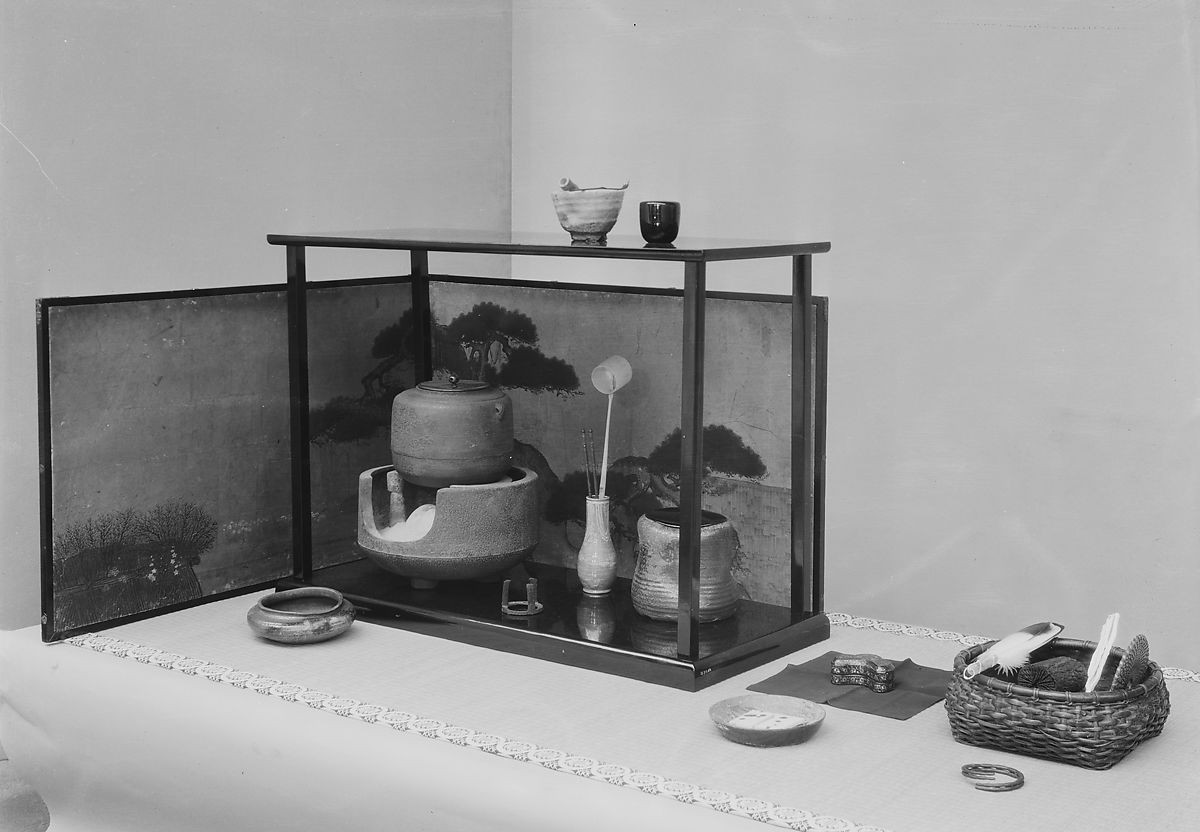 Iron tea kettles like our object of the month were decorated with a huge range of subjects, including flowers, animals, people, landscapes, fruit and vegetables, gods and goddesses, and scenes from legends or folk tales. Some examples from the Castle’s collection can be seen in the Japanese Room. 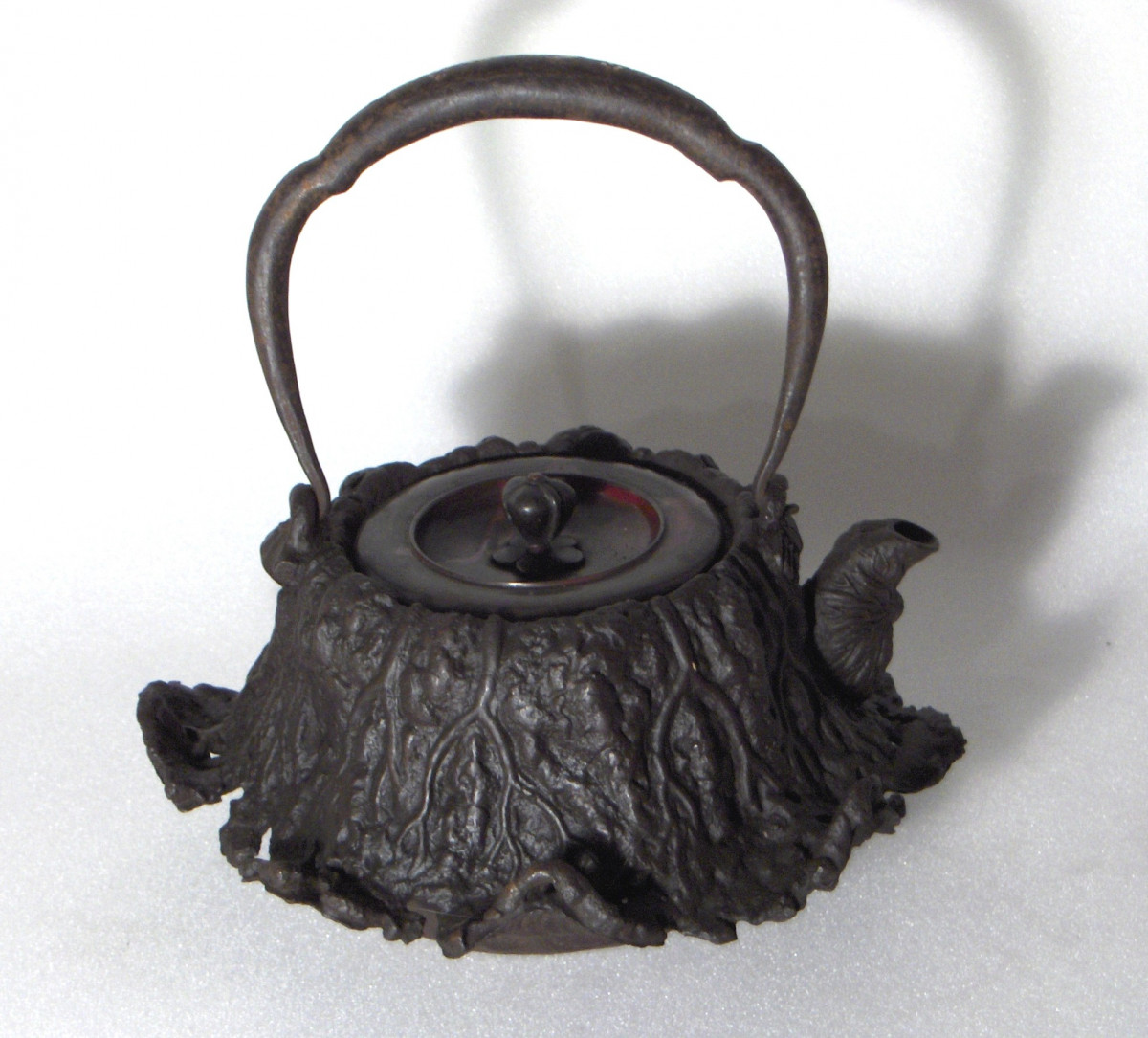 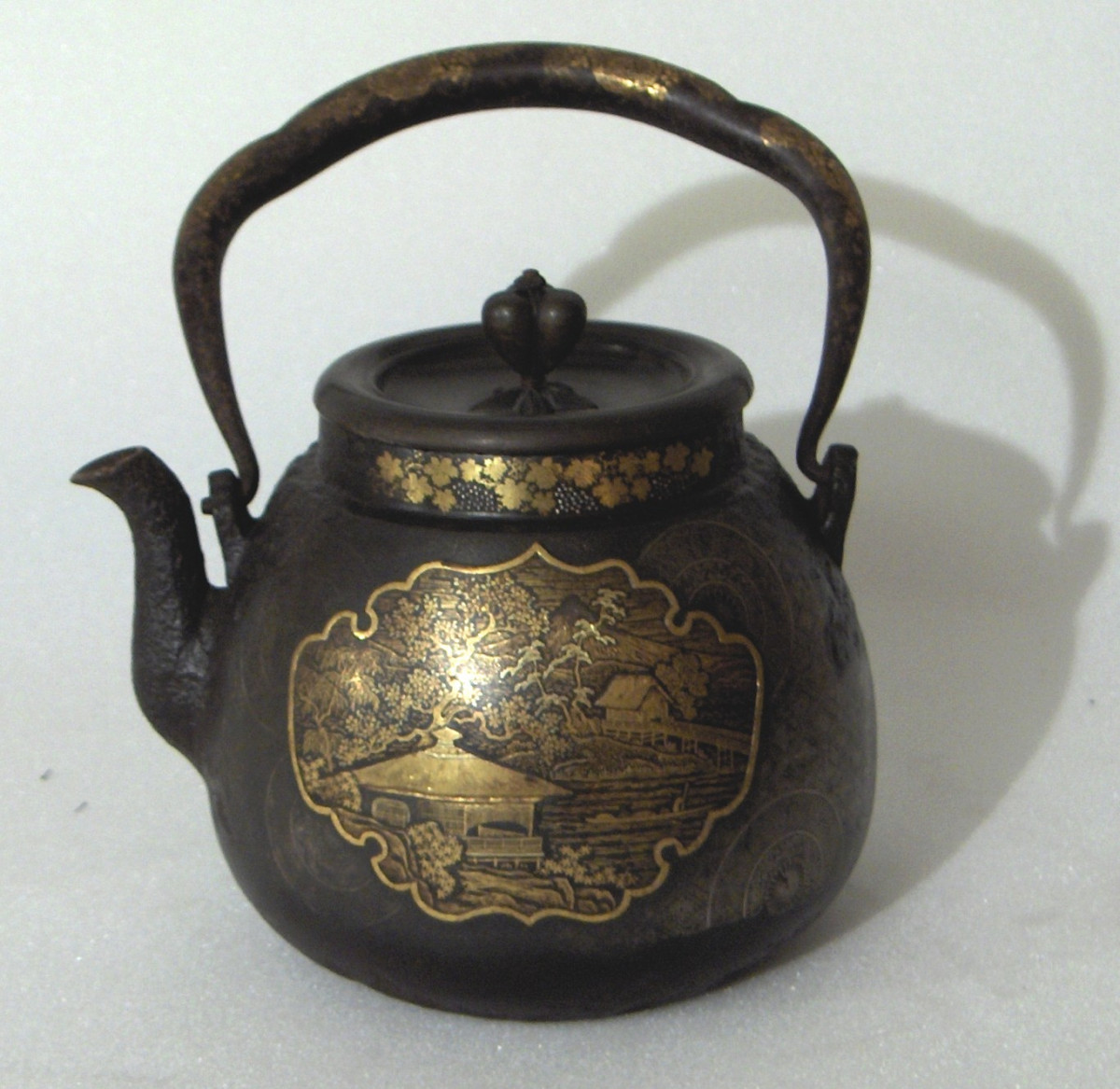 By the time the Castle opens on April 3rd, our avenue of cherry blossom trees will almost have lost its petals. The short-lived beauty of cherry blossom reflects a key Japanese concept – things that do not last are the most precious. This principle also applies to the Japanese tea ceremony and the idea of ichigo ichie. This saying translates roughly as ‘one meeting in one life’, and is used to reflect the idea that each tea gathering is a unique moment that will never happen again.