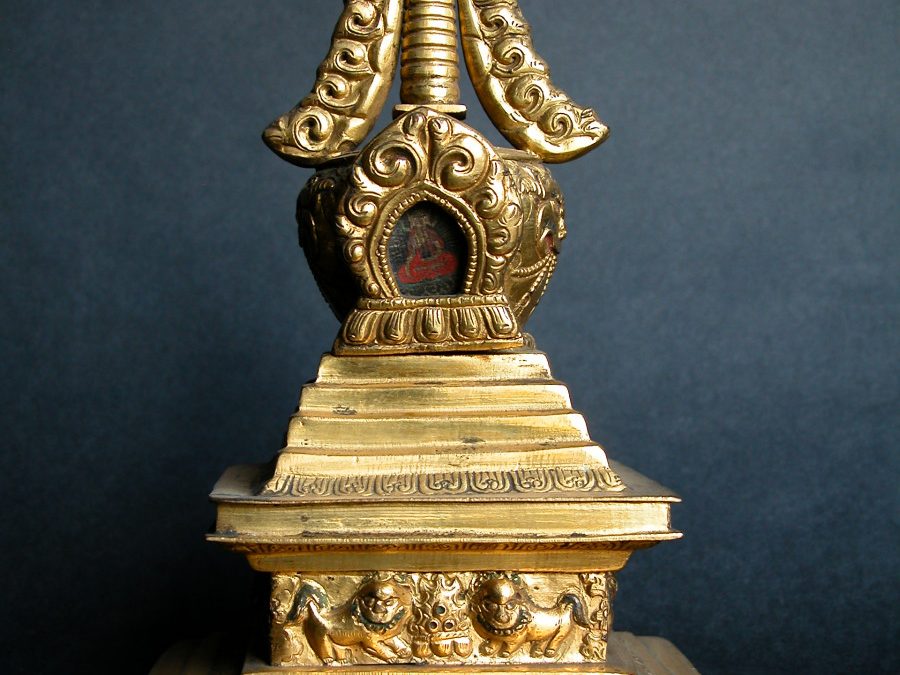 Our Object of the Month for September has recently been brought out from storage and added to the Buddhist Room displays. It is a small gilt bronze model of a stupa, or Buddhist monument. In ancient India the stupa was a sacred burial mound. Relics of an important teacher, leader, or king would be housed in a stupa, including those of the Buddha. After his death in ancient India, the Buddha’s body was cremated and his remains divided up between his followers and interred in large stupas. These became important sacred sites which people would visit, worship, and walk around as part of their meditation practice. Stupas were physical representations of the Buddha before it became acceptable to depict him as a man in paintings, statues, and carvings. The stupa is therefore the most ancient form of Buddhist art. 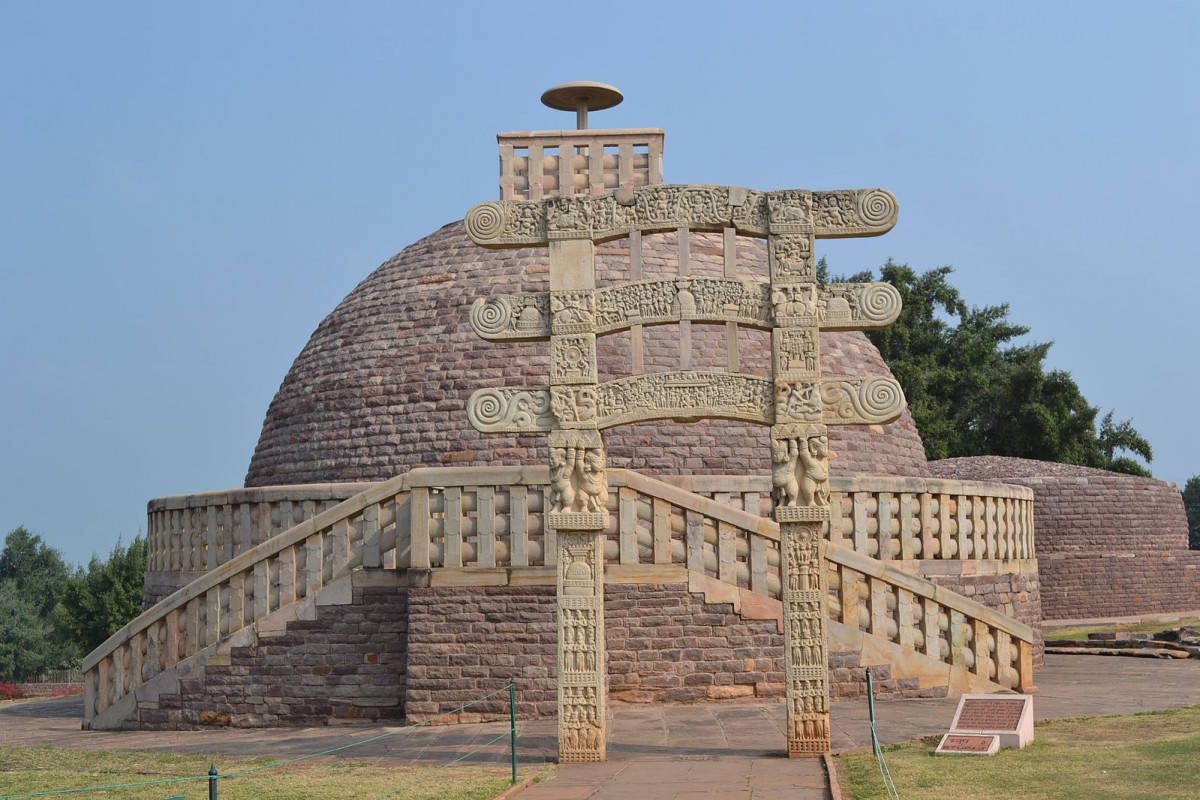 The Great Stupa at Sanchi, one of the oldest Buddhist stupas in existence from the 3rd century BC,  ASI monument number N-MP-220, By Nandanupadhyay - Own work, CC BY-SA 3.0

Our Object of the Month is only 17.5cm centimetres high and includes a tiny painted image of the Buddha. Each element of it has a symbolic meaning. The spire at the top, draped by a flowing scarf, represents the thirteen steps towards becoming a Buddha, or ‘enlightened one’. There are lotus petals, a symbol of enlightenment decorating the edges of the steps. The stupa is sitting on a ‘lion throne’, showing its importance and referring to the teachings of the Buddha which were known as the ‘lion’s roar’. Between the lions there is a flaming triple jewel. The three jewels represent the Buddha, the dharma (the teachings of the Buddha) and the sangha (the community of Buddhist monks and nuns). The top of the spire of the Castle’s stupa is missing its sun and crescent moon emblem on the very top. Buddhist statues are made to be visually striking with their beautiful carving and gold decoration, but each element also has a deeper meaning. 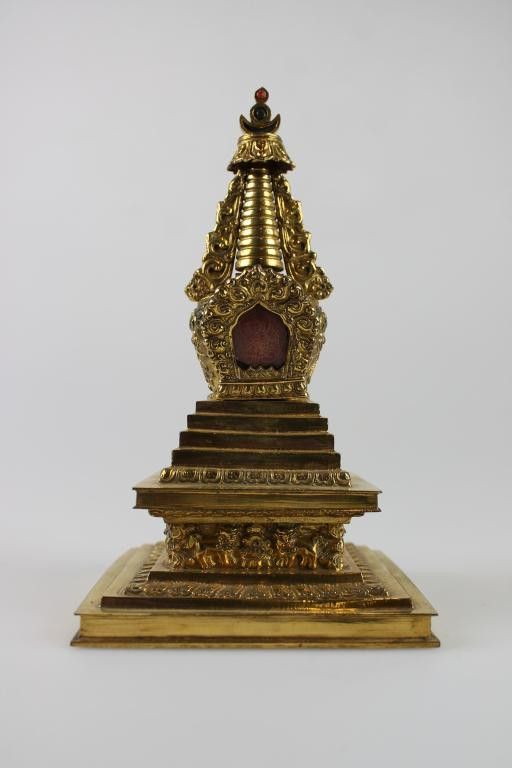 Small stupas like our Object of the Month would house relics of an important person or sacred items such as rolled-up texts. They would have been made either for display in the home or at a monastery or temple. Owning, sponsoring the creation of, or making a stupa is a merit-building activity. It is believed to help build merit or good karma, ensuring rebirth into a better life. Buddhist statues made from gilt-bronze are also usually hollow and sacred materials or relics are placed inside them as part of a consecration ceremony. Once a stupa, statue, or painting is consecrated (officially made holy) by a monk in the ceremony, it is treated as a physical representation of the Buddha or other important Buddhist deity. It is treated with great respect, given offerings, and placed in a honoured position on an altar. The sacred material inside a model stupa or Buddhist statue is usually sealed with a baseplate. At some point in its history the baseplate of our stupa and its sacred contents were removed, leaving it hollow. 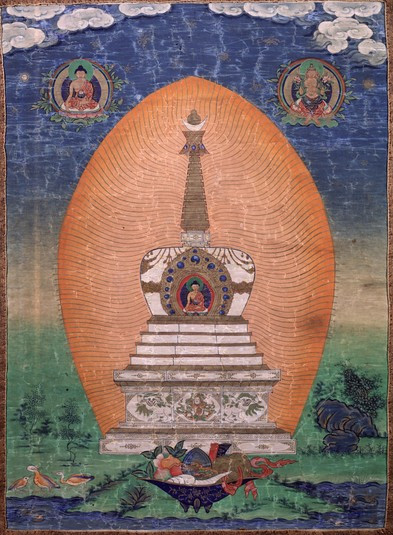 Thangka (Tibetan painting) depicting a stupa with an image of the Buddha and a bowl containing offerings in front, Eastern Tibet, 1700 - 1799, ground mineral pigment on cotton, Rubin Museum of Art, accession number P1998.32.2

This stupa features in an online exhibition in collaboration with and hosted by The Ceramic House in Brighton. A group of leading contemporary ceramic artists from China, selected by Shanghai Academy of Fine Art, are responding to objects in the Castle’s Buddhist collection with their works. The exhibition is titled ‘Neither Increasing Nor Decreasing’, a quote from the Heart Sutra. You can view the exhibition online from the 31st of August here and find out more here. 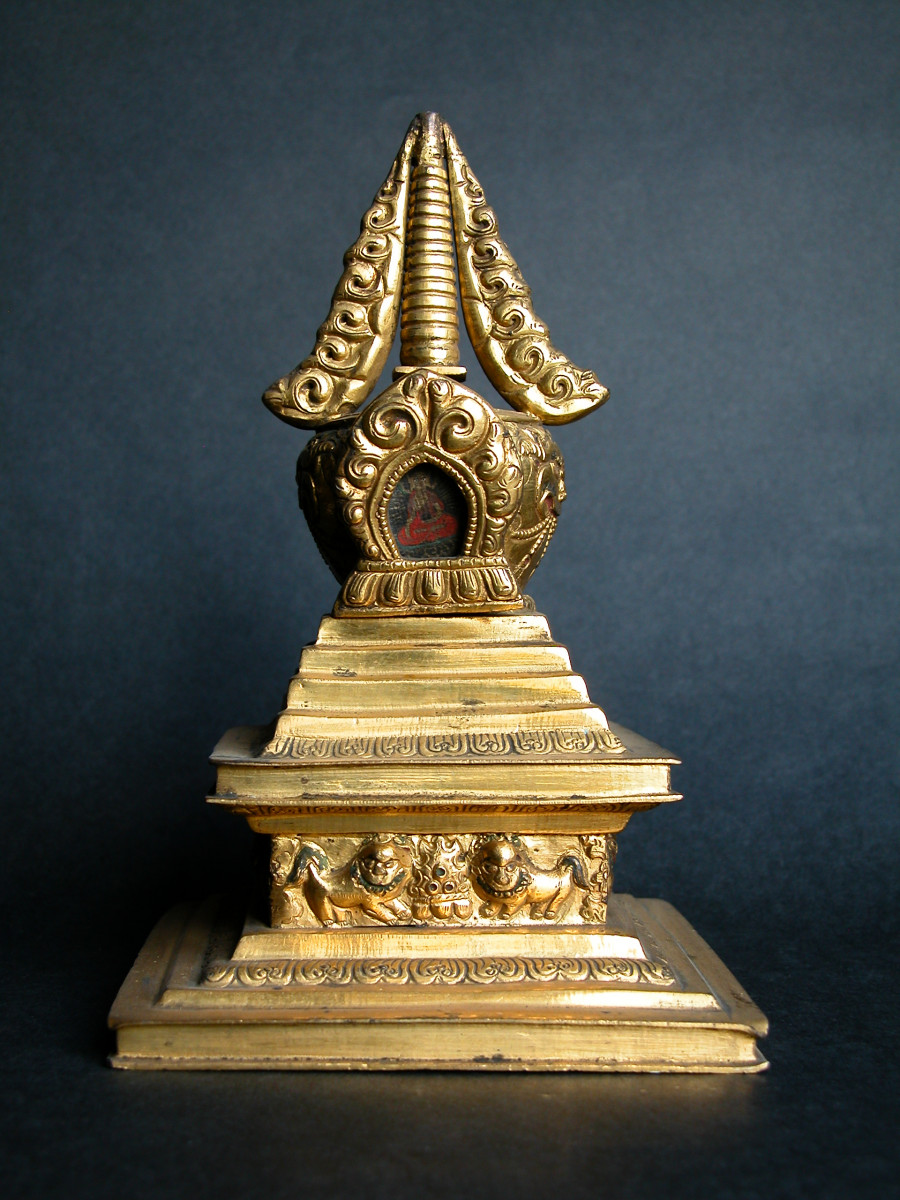