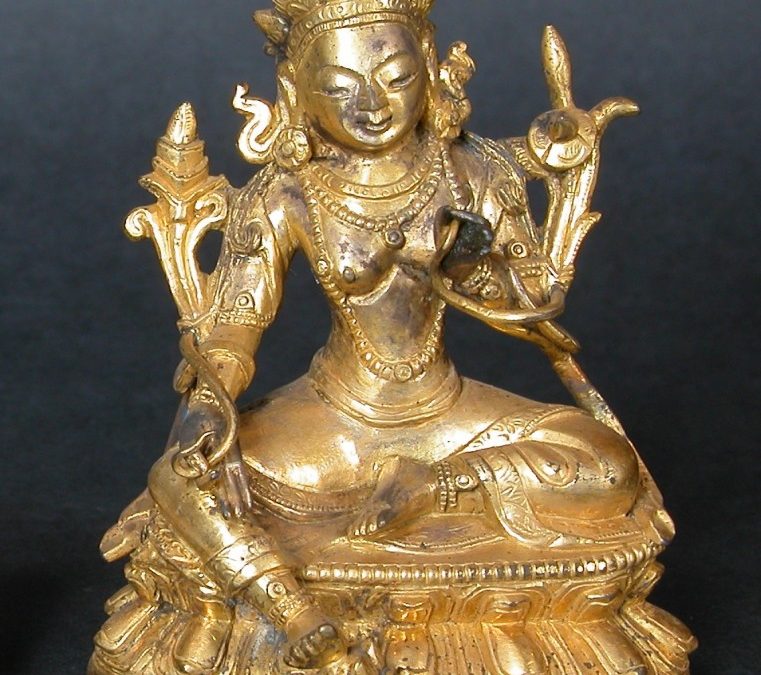 Our Object of the Month for October is this miniature statue of the deity Green Tara, from the Buddhist collection. Carved in tiny detail from bronze which was then gilded, she is seated on a lotus throne and holding two lotus buds. She wears a crown, a draped robe, and elaborate jewellery. She is gazing down with a compassionate smile. The statue was made in China in the 18th century, in a style inspired by Tibetan and Nepalese Buddhist sculpture. The layer of gold covering it is well preserved, indicating that it was treasured throughout its lifetime – either its past owners took great care to look after it or at some point it was re-gilded to return its golden sheen. 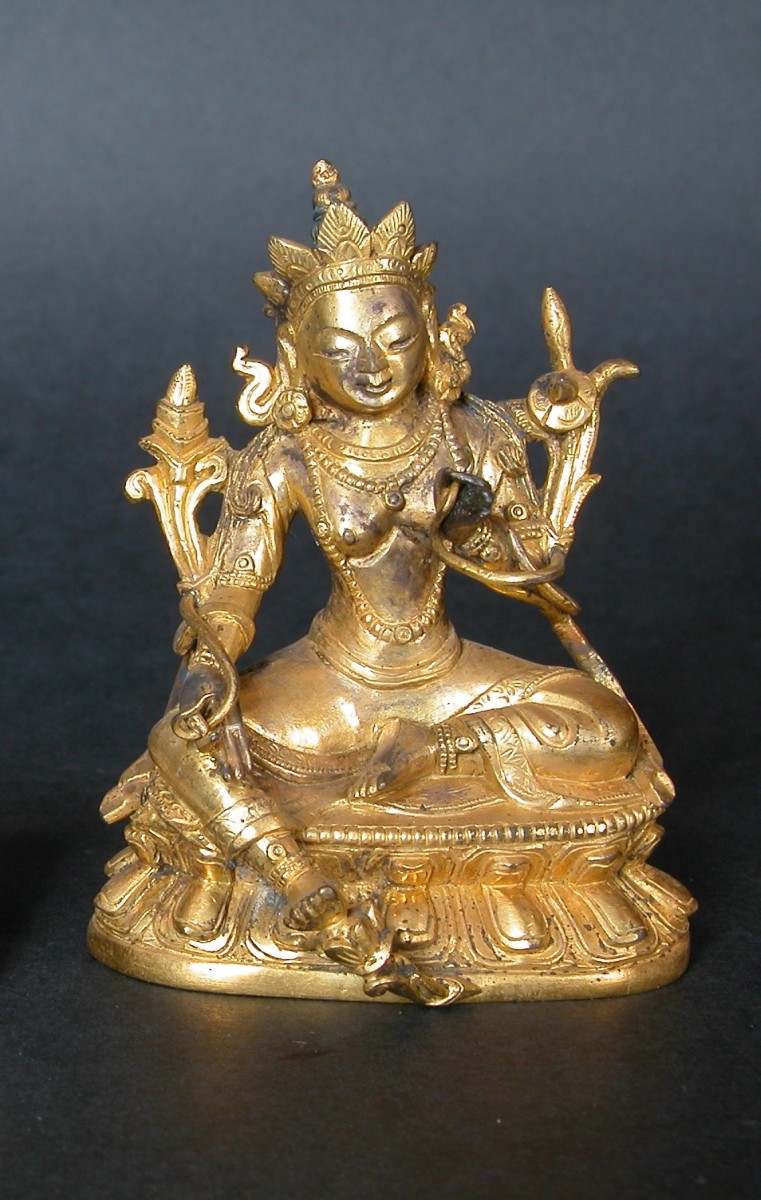 Green Tara is a bodhisattva, or a being who has dedicated herself to helping others achieve enlightenment. Enlightenment is believed to be a state of complete peace and freedom from suffering. A key role of the bodhisattva is spreading the word of the original Buddha or ‘enlightened one’ – the ancient Indian prince whose teachings formed the foundation of Buddhism sometime around the 6th– 4th centuries BC. The Buddha claimed to have discovered the path to enlightenment through meditation and behaving, thinking and living in a moral way. His followers passed on his teachings and Buddhism was spread along the Silk Road across Asia from the first century BC. Today it is an important religion with many different branches, schools and followers around the world. 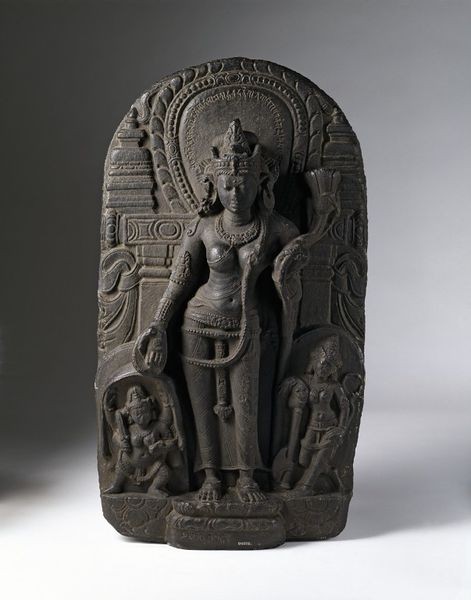 As with the black basalt Indian statue above, our Green Tara is depicted with her hands in two different mudra, or symbolic gestures. Her left hand is in the gesture of teaching, and her right in the gesture of granting wishes. Tara is a compassionate bodhisattva whose role is to protect those who are aiming to achieve enlightenment. As Buddhism developed, she began to be worshipped as an independent deity rather than just as a bodhisattva dedicated to spreading the teachings of the Buddha. Particularly in Tibet, Nepal, and Mongolia she is worshipped as a wise ‘mother goddess’.

There are two different versions of Tara. Green Tara can be identified as holding lotus buds and resting her right foot on a lotus. White Tara is usually depicted as seated in a meditation posture with her legs crossed, and holding open lotus flowers. Green Tara is believed to be a goddess of compassion and protection, and White Tara of wisdom and longevity. 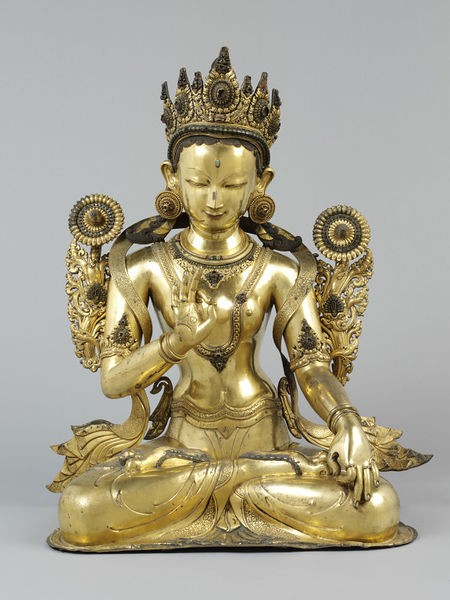 One common belief about Tara is that she was born from the tear of one of the most widely-worshipped bodhisattva, Avalokitesvara. Like Tara, Avalokitesvara is a compassionate saviour who guides followers of Buddhism to enlightenment. The legend goes that when a tear fell from Avalokitesvara’s eye, it hit the ground and formed a lake. A lotus bloomed from the lake and Tara was born out of that lotus. Tara is often depicted alongside Avalokitesvara in Buddhist artworks. 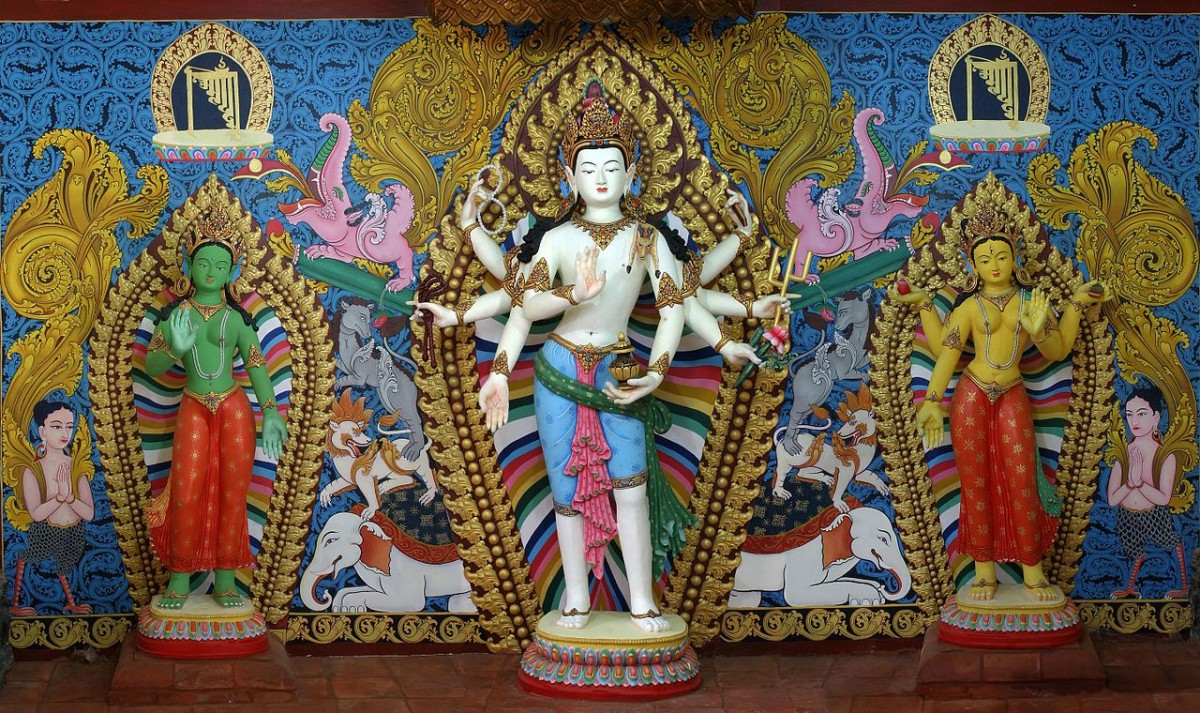 A multi-armed form of Avalokitesvara with Green Tara to his right, Nepal, By Wisdomguita - Own work, CC BY-SA 4.0

Due to the size of this Tara, it is likely to have been made as a personal statue that could be carried for protection or placed on an altar in the home. Its portable size suggests that it could have been used as a talisman or charm. It is part of a small group of bodhisattva statues on display in the Castle’s Buddhist Room. Statues of this size would have been ideal collectible objects for foreign travellers, which may be how this miniature Tara ended up at the auction from which Denys Eyre Bower bought it.