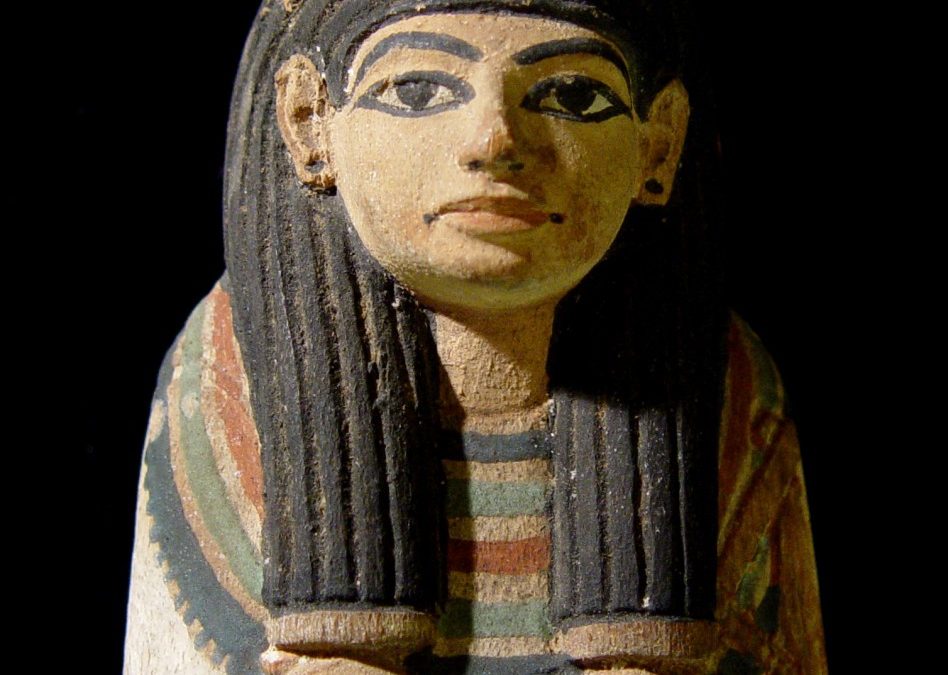 We are very pleased to announce the return of this rare and well-preserved shabti figure from the Houston Museum of Natural Science, USA, where it has been on loan.

A shabti is a small figure of a servant or labourer. They were often made as a miniature version of a deceased person. They were made and buried in tombs for thousands of years from the Middle Kingdom (around 2,000 BC), to the Ptolemaic Period when they disappeared around 30 BC. In the New Kingdom they were made in the form of mummies holding farming tools. This was because it was believed that they would come to life in the afterlife and carry out any hard labour that the gods asked the deceased person to do. The word ‘shabti’ is believed to have meant ‘answerer’ in Ancient Egyptian, and the shabtis were made to answer to the demands of the gods in the place of their owner. Many shabti figures are inscribed with the following spell, which would make sure that they did their job in the afterlife –

If one counts on the Osiris (Title and Name of Deceased)

To do all the works which are needed to be done

There in the God’s land

If obstacles are indeed in the way of a man and his duties,

‘here I am’ you shall say

When you are called upon at any time to serve there, to cultivate the fields, to irrigate the lands, to transport by boat the sand of the east to the west, and vice-versa 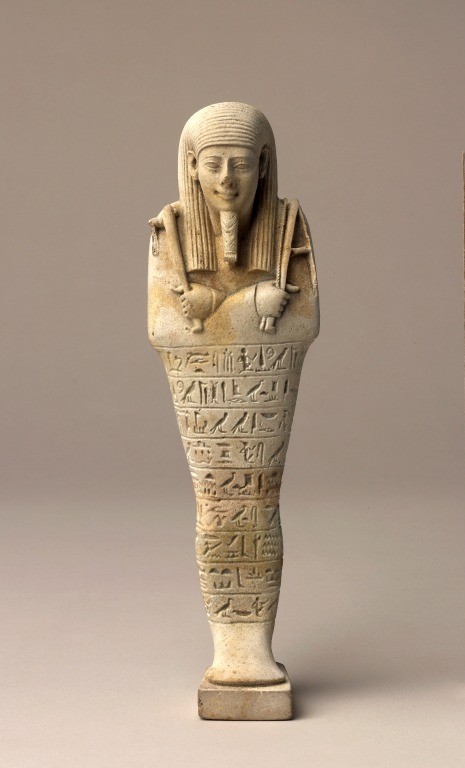 The inscription on the shabti tells us that it belonged to ‘The Lady of the House, Ta-mit’. ‘Ta-mit’ translates as ‘lady cat’ – she was perhaps named for her love of cats or her worship of a cat-headed goddess such as Bastet. ‘Mit’ or ‘miu’ was the ancient Egyptian word for a cat and was an onomatopoeia imitating a cat’s meow. Cats gained an important place in ancient Egyptian daily life as hunters of mice and poisonous snakes – they became well-loved as protectors of both grain stores and the family home. The shabti is holding a hoe in one hand, and a rope that drapes over her shoulder and ends in a basket.

View of the back of the shabti of Ta-mit

This shabti is made from painted wood, and the colours are very well preserved. It is likely that it was excavated at Thebes, and was originally part of the famous collection of Lord William Amhurst, 1st Baron of Hackney (1835 – 1909). Lord Amhurst built up a large collection of Egyptian artefacts at his home Didlington Hall, which he turned into his own museum. He was a patron of the young Howard Carter, who often visited to view his Egyptian collection. The shabti was sold in a sale of Amhurst’s collection in 1921 at Sotheby’s. Our records note that ‘Howard Carter commented favourably on this shabti at the 1921 sale’.

Our records also include a rumour that the Ta-mit shabti was the inspiration behind the famous novel ‘She’ by H.Rider Haggard. In the novel, ‘she’ refers to Ayesha, a mysterious queen who rules over a kingdom in Africa. She is immortal and has magical powers – the novel is a fantasy adventure. Haggard is known for having created the ‘lost world’ literary genre, usually involving a Western hero traveling to a far-off, undiscovered land.