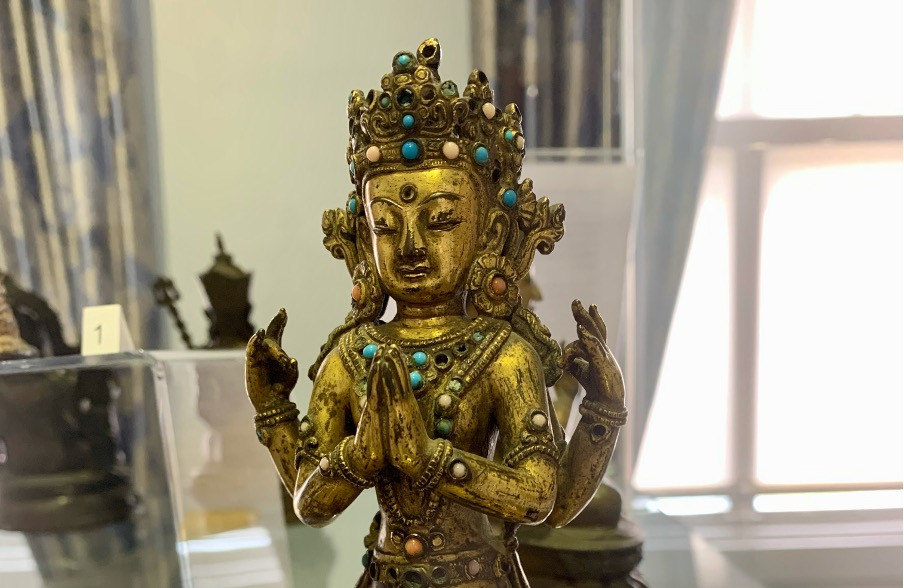 Our Object of the Month for August is a small statue of Sadaksari Avalokiteśvara, cast in gilt bronze with inlaid semi-precious stones (Tibetan, 15th century). 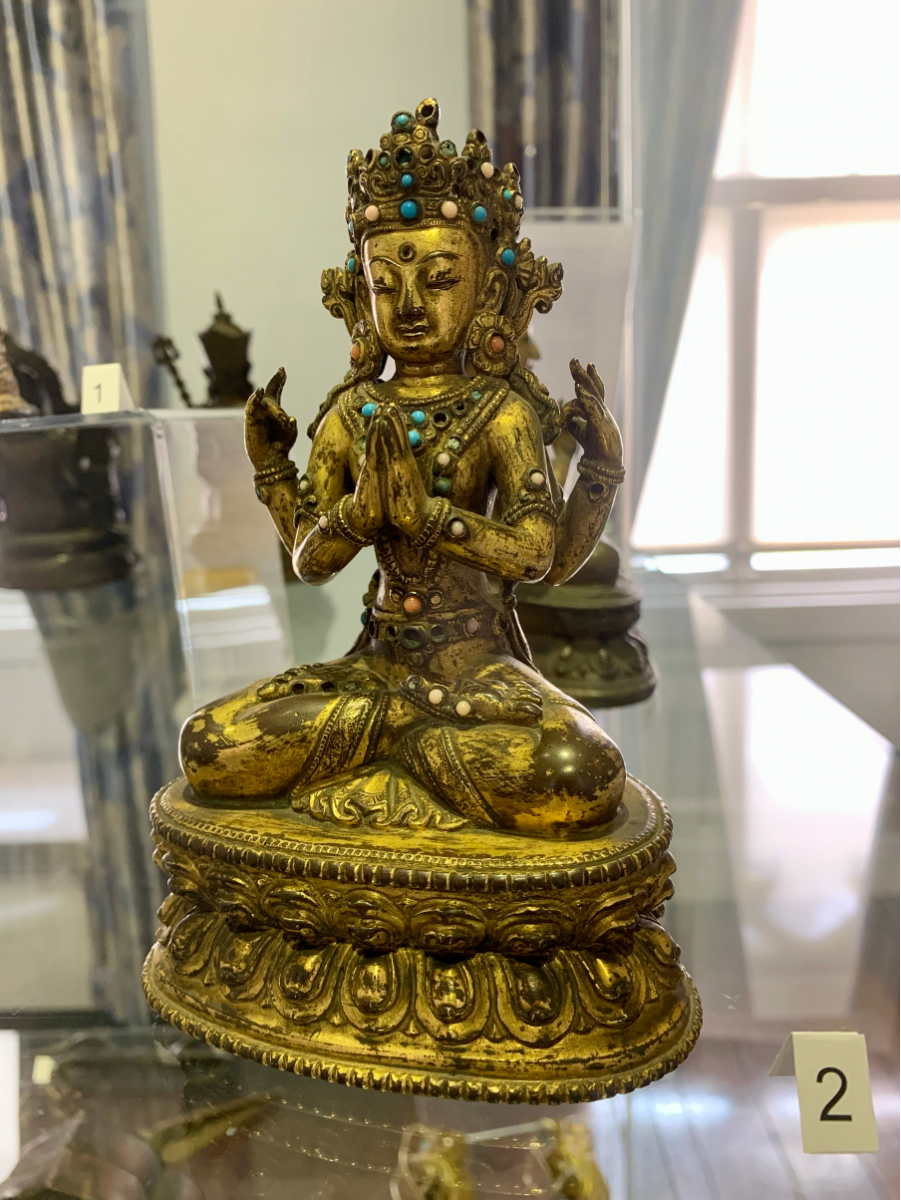 In Buddhism Avalokiteśvara is the bodhisattva of compassion (a bodhisattva is someone who has dedicated their life - including any future lives - to liberating people and sentient beings from suffering). He (or she) is supposed to represent Amitabha Buddha’s compassion for the world (Amitabha is one of several legendary Buddhas believed to have existed before the historical Gautama Buddha), and more generally is believed to embody the compassion that all bodhisattvas have for the world. The present Dalai Lama is believed by Tibetans to be a manifestation of Avalokiteśvara.

Philosophically speaking, Avalokiteśvara can be seen as representing the potential for compassion in the human mind; an ultimately non-referential compassion - at least according to the esoteric Tibetan contemplative tradition of Dzogchen - that  belongs to everyone and no-one.

The word Avalokiteśvara means  “lord who gazes down (at the world)” (with pity); while a possibly earlier variation, Avalokitasvara, means “he who looks down upon [the] sound” (of sentient beings crying for help).

According to legend Avalokiteśvara manifests in many forms, both young and old, male and female, as humans and gods - even as animals.

In Tibet - depicted as male - he is called Chenrezig, which is a compound Tibetan word (spyan “eye”, ras “continuity” and gzig “to look”); giving the meaning of “one who always looks upon all beings” (with the eye of compassion). 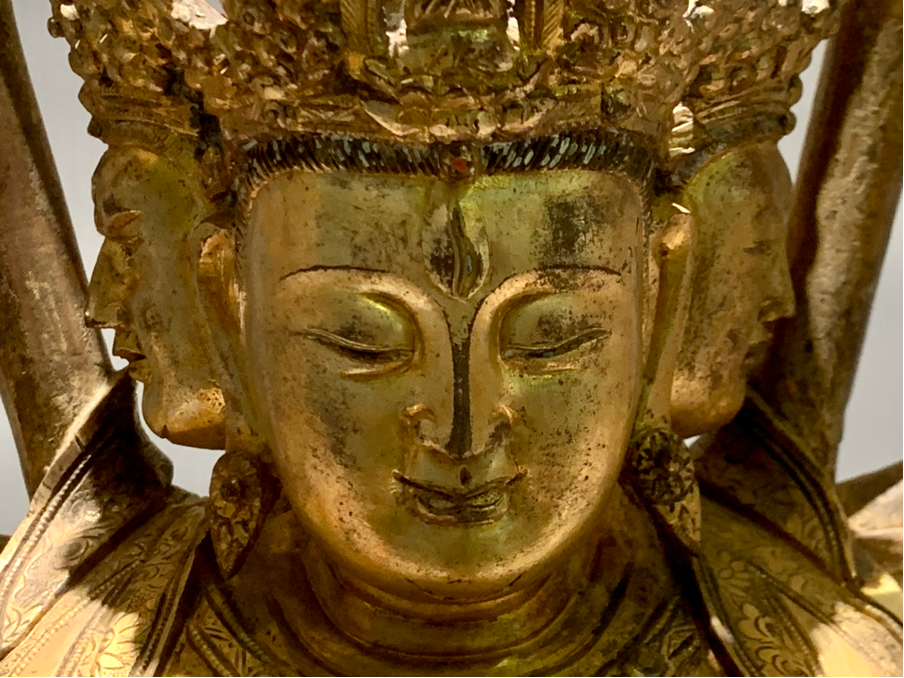 A close-up of a statue of Avalokitesvara in the Chiddingstone Castle collection, Sino-Tibetan, 18th century, object number 01.1539

In East Asia she is female - called Guanyin in China, Kannon in Japan - meaning she who “perceives [the] sound, or cries” (of sentient beings crying for help). 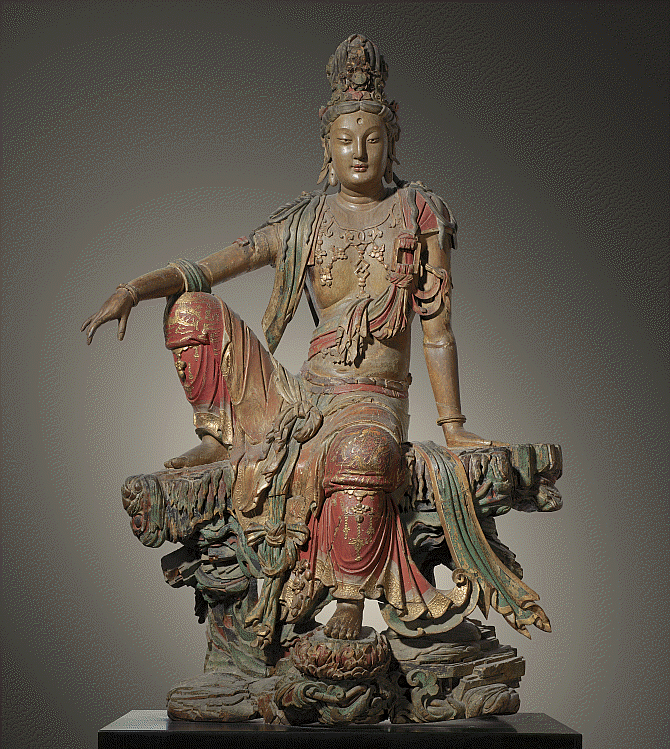 There is a Chinese poem that says the body of Guanyin is neither male nor female, and she is often regarded as an all-compassionate mother goddess in East Asia. Sometimes she is depicted as a mother goddess holding a child, called Songzi Guanyin (a representation that has been called the ‘Chinese Madonna and Child’ for its likeness to well-known Catholic imagery). 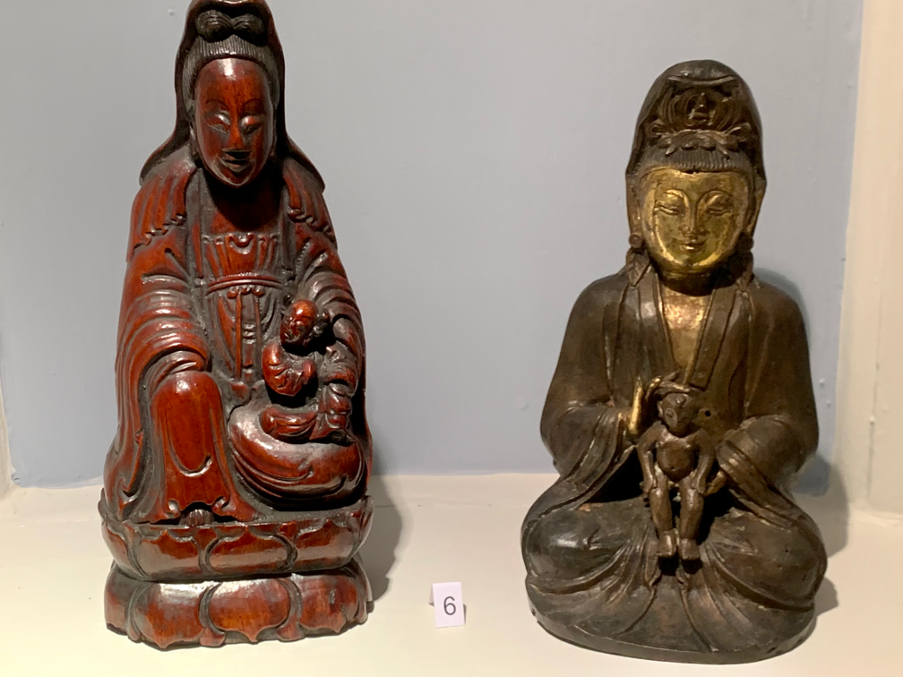 In painting and sculpture, Avalokiteśvara has been depicted in many different ways, including with eleven faces (to teach in all directions); with a thousand arms and a thousand eyes (to see and reach out to suffering beings everywhere).

The particular way that Avalokiteśvara is shown here [i.e. as the object of the month] - called Sadaksari Lokesvara - is with one face and four arms, popular in Tibet (for this reason he is also sometimes called Caturbhuja, meaning “four-armed”). When depicted in this way Sadaksari - which means literally “Lord of the Six Syllables” in Sanskrit - is believed to embody the six-syllable mantra ‘om mani padme hum’, the most recited mantra in Tibet. Om mani padme hum is believed to be the condensed form of all Buddhist teachings: ‘Om’ (supposed to be the sound of universe), ‘mani-padme’ (“jewel in the lotus”, where the jewel represents enlightenment), and ‘Hum’ (also a sacred sound). 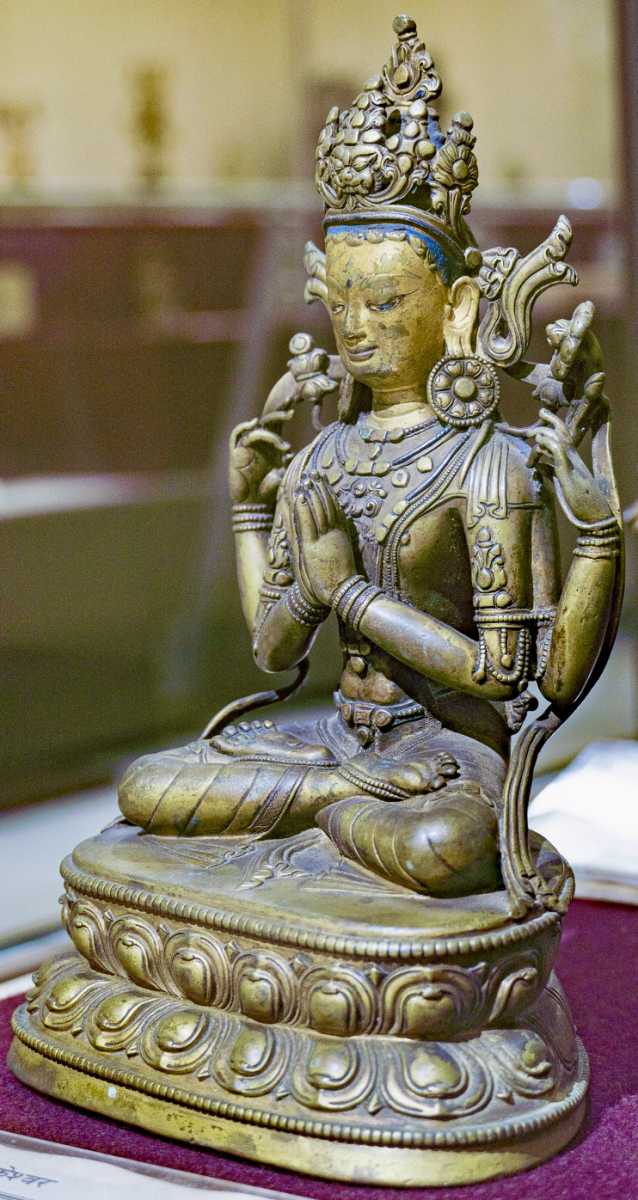 Always seated with his legs locked, with two hands (a hand gesture associated with reverence called the Anjali Mudra) Sadaksari holds the ‘wish-granting jewel’ (of an enlightened mind) against his heart. While with the second raised pair of hands he usually holds a rosary or prayer beads - called a mala in Tibet - in his  right hand (symbolising the recitation of the ‘om mani padme hum’ mantra, which is accompanied by counting a mala), and a lotus flower in his left hand. The Lotus is a symbol present throughout Indian religion, signifying purity (due to its ability to emerge unstained from the mud in which it grows), and spiritual awakening. In this sculpture the rosary and lotus are absent but still implied. 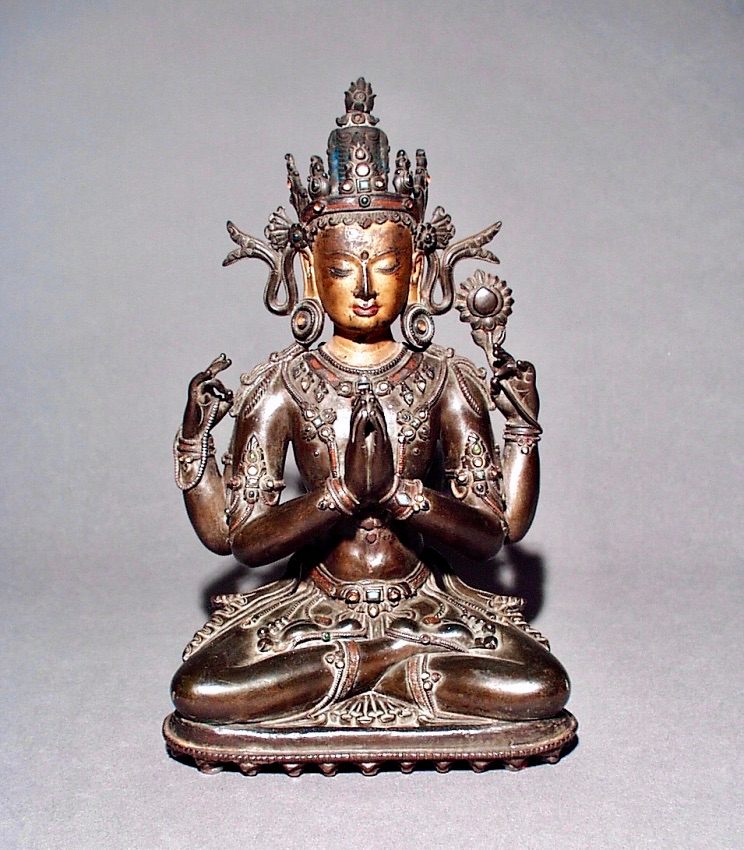 Sadaksari wears royal garments (instead of robes) to show his connection to the world of humanity; and has a smiling face, with eyes - looking down serenely on the world - filled with equal compassion for all.

Our Object of the Month for August was chosen, researched, and written by Chiddingstone Castle volunteer James MacDougall. James recently completed his MA in Buddhist Studies at SOAS, London.