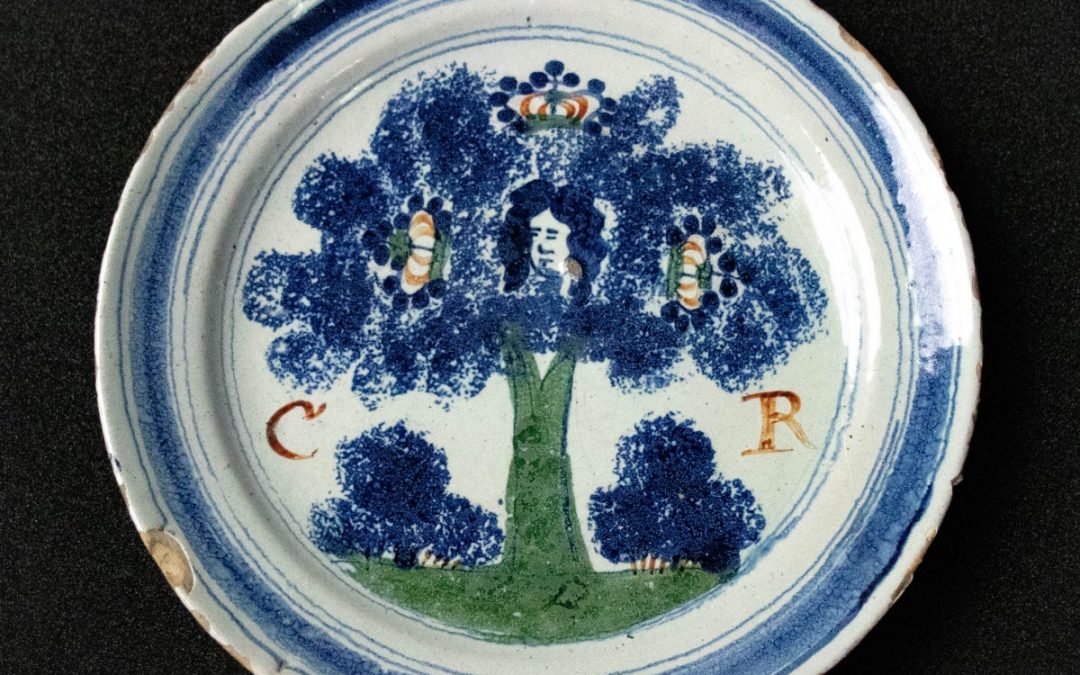 This month’s object is a glazed ceramic plate decorated with an important symbol of support for Charles II and the Stuart royal family. It depicts a key moment in the daring escape made by Charles II in the mid-17th century after being defeated by Oliver Cromwell’s parliamentary army. Looking for somewhere to hide from those after the £1,000 reward for his capture, Charles II spent a day hiding in a large oak tree at Boscobel House in Shropshire.

After being defeated at the battle of Worcester in 1651, Charles II and some of his men managed to escape, and were looking for a place to hide from the parliamentary troops. One of his group recommended Boscobel House, as he knew that the owners were loyal to the crown. They rode to the house and disguised Charles II, cutting his hair and dressing him in poor clothes. It was difficult to disguise him as he had distinctive features and was over six feet tall. Charles II hid in an oak tree for a whole day in the grounds of the house, whilst it was searched by enemy soldiers. The tree was named the Royal Oak in honour of this event and became a symbol for the support of Charles II and the Stuart family. The design on this plate shows Charles II’s face peering out from the oak tree, which is also decorated by the crowns of England, Scotland, and Ireland, symbolising his right to the throne of these three kingdoms. 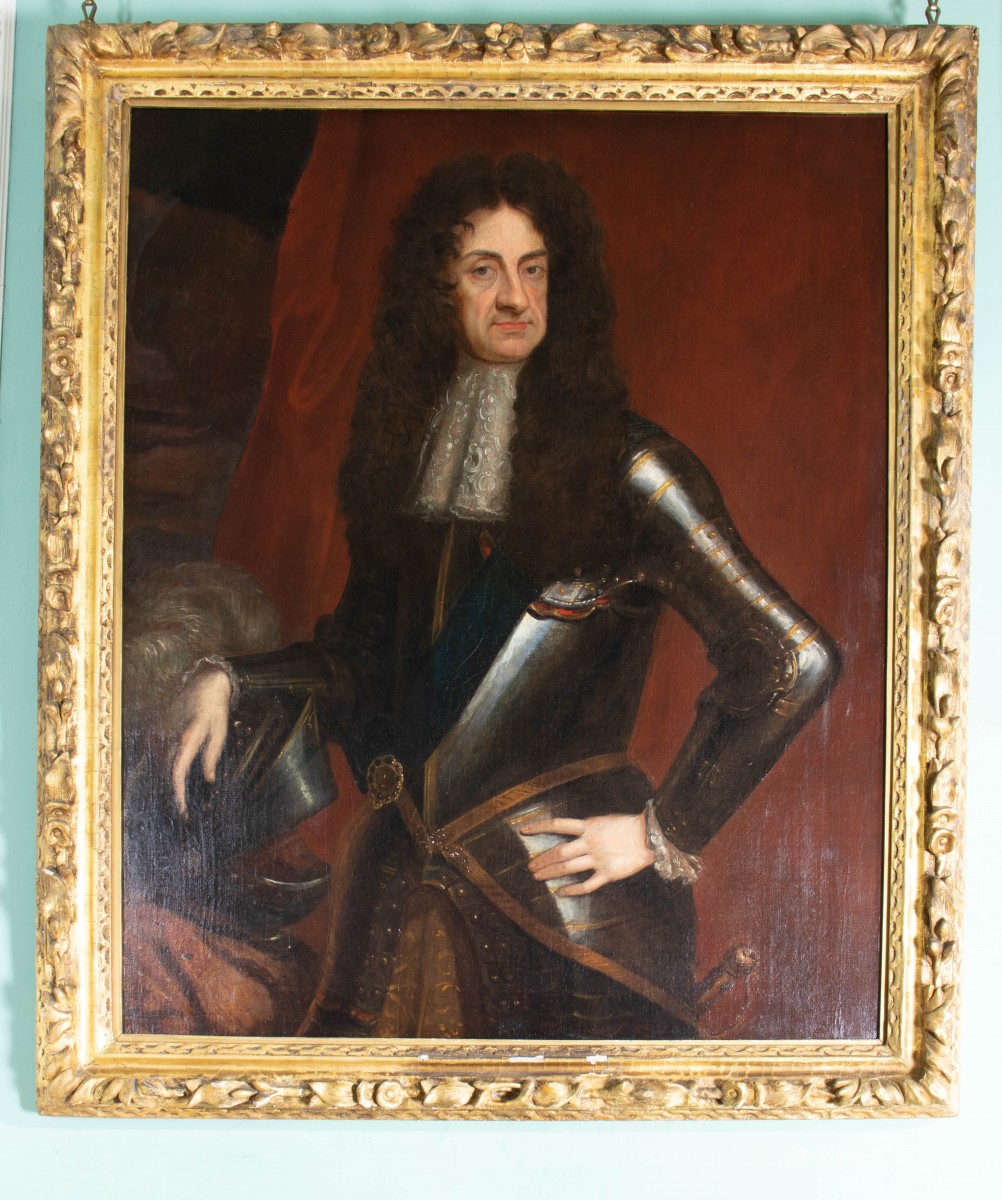 The European ceramics factory Delft produced white and blue glazed earthenware in an effort to imitate Chinese porcelain, which was very popular. In the 16th century, Portuguese traders began importing Chinese porcelain into Europe from China. This porcelain was made exclusively for the European and export markets. It was, however, very expensive, and so European factories attempted to recreate the look of porcelain with plates such as this one. When porcelain first arrived in Europe, no one understood how it was made and it was considered to be a very precious material. Objects such as Chinese porcelain bowls were often mounted in gold fittings for display in European mansions, emphasising how valuable they were.

Ceramics and other objects with the ‘Royal Oak’ design were widely produced in the 18th century. The image below is of a very similar Delft plate to the one at the Castle, which is in the British Museum. The Royal Oak itself had so many pieces taken from it by supports of Charles II and the Stuart royal family that it died, but a tree was grown from one of its acorns and named ‘Son of Royal Oak’. It can still be seen in the grounds of Boscobel House today. 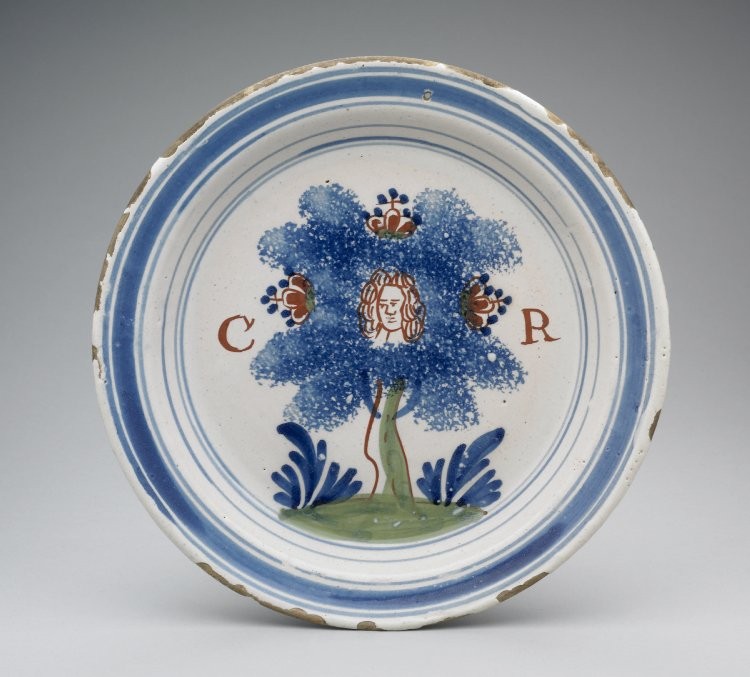 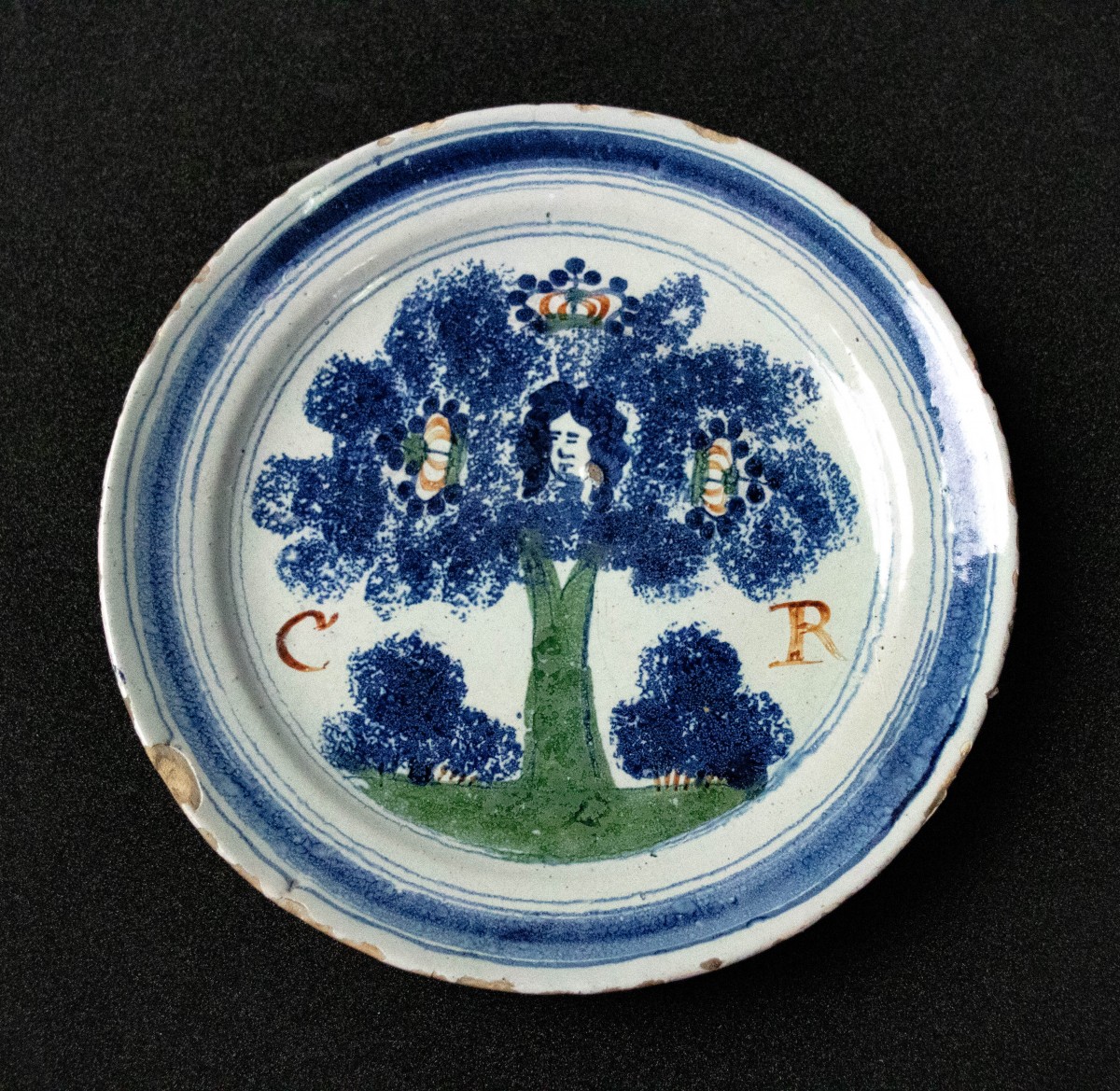 This month’s object was photographed with the kind help of Edward Torry Photography.