Our July object of the month is this brightly painted fragment of an inner coffin. It was made around 1069 – 945 BC, the 21st Dynasty in Ancient Egypt. The inner coffin held the mummified body of the deceased. It would be placed (if the person in it had enough money and status) in several larger decorated coffins, and finally a large stone sarcophagus for protection.  The mummy of Tutankhamun, wearing an elaborate mask, was placed inside three coffins which were decorated with gold.

The inscription on this coffin fragment identifies it as belonging to belonging to an official called Amenkhau, which means ‘Amun has appeared’. Amun was the Ancient Egyptian god of the sun and the air, and was considered to be the creator god after his cult rose to prominence in Thebes in the New Kingdom (c. 1570-1069 BCE). The name Amenkhau appears around the end of the New Kingdom and early in the Third Intermediate Period. 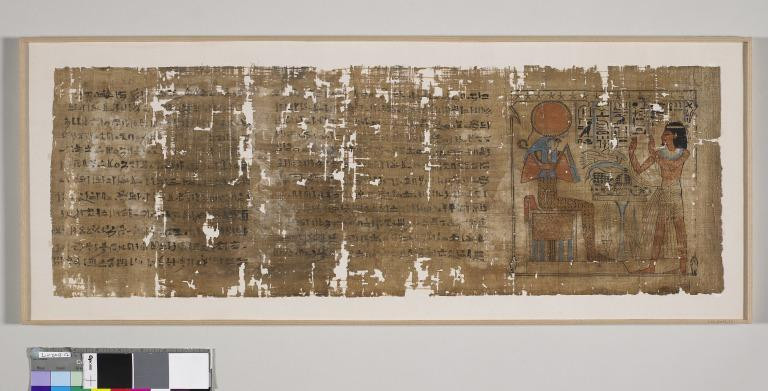 Our object of the month is a fragment from an inner coffin made from cartonnage. This ancient material was made from linen bandages which were shaped and soaked in plant gum so that they hardened. The bandages would then be covered in a mixture of gum and chalk called gesso, providing a smooth white surface for painting on with natural pigments. Bright colours were used to paint this coffin lid, which are still preserved today. Different colours had different meanings in Ancient Egypt. Green, for example, which can be seen on the coffin fragment, was associated with freshness, new crops, and rebirth. 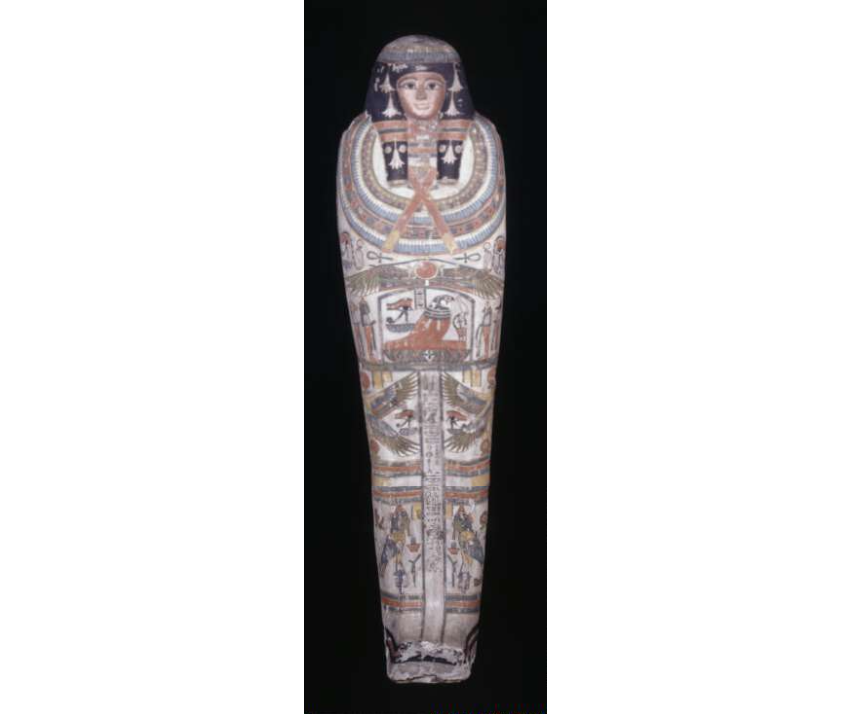 Depicted on the coffin lid fragment is Osiris, God of the Dead, with the crook, flail, and crown of a King. According to myth, Osiris became the King of the underworld after he was killed by his brother, the god Seth, and resurrected by his wife, the goddess Isis. Ancient Egpytians hoped that after death they too would become ‘an Osiris’ and be reborn into a new life. Osiris is usually depicted as a mummy, wrapped from the neck downwards in white bandages. Osiris’ son was the falcon-headed god of the sun and kingship, Horus. 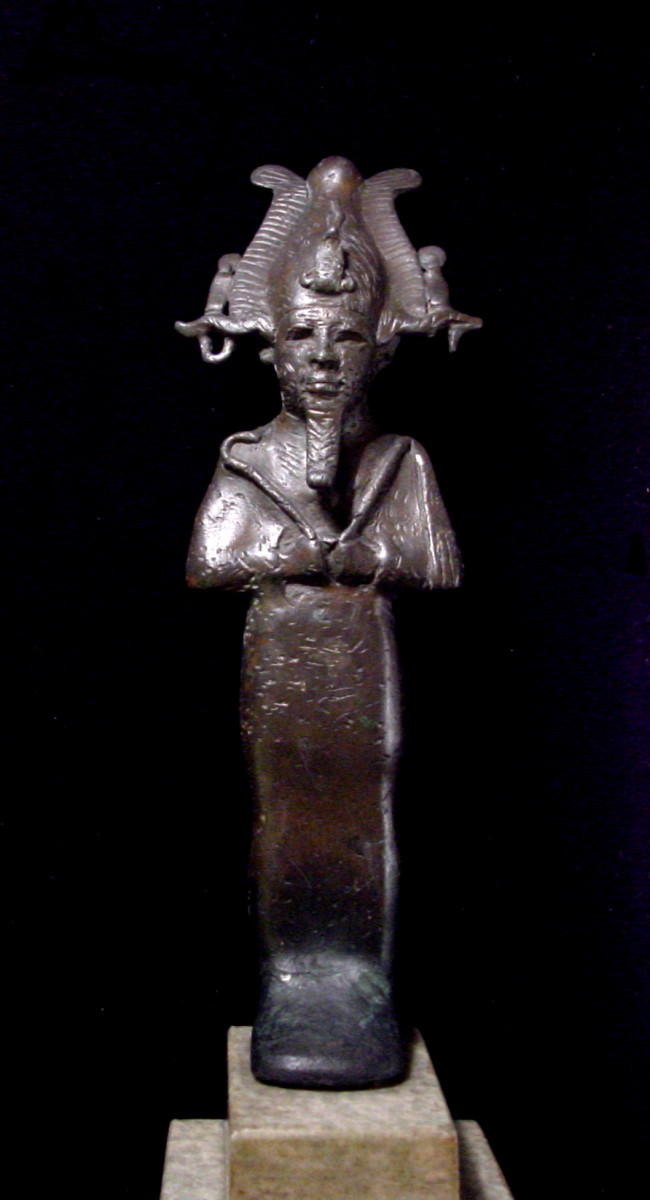 Standing next to Osiris on the coffin lid fragment are two of the Sons of Horus – the baboon-headed Hapi and the jackal-headed Duamutef. The lids of the four canopic jars which held the organs of a mummified person were often carved in the shape of the heads of the four sons of Horus. They were believed to protect the organs –

They were also a popular subject for amulets which were placed on the body to protect it for a safe journey to the afterlife. 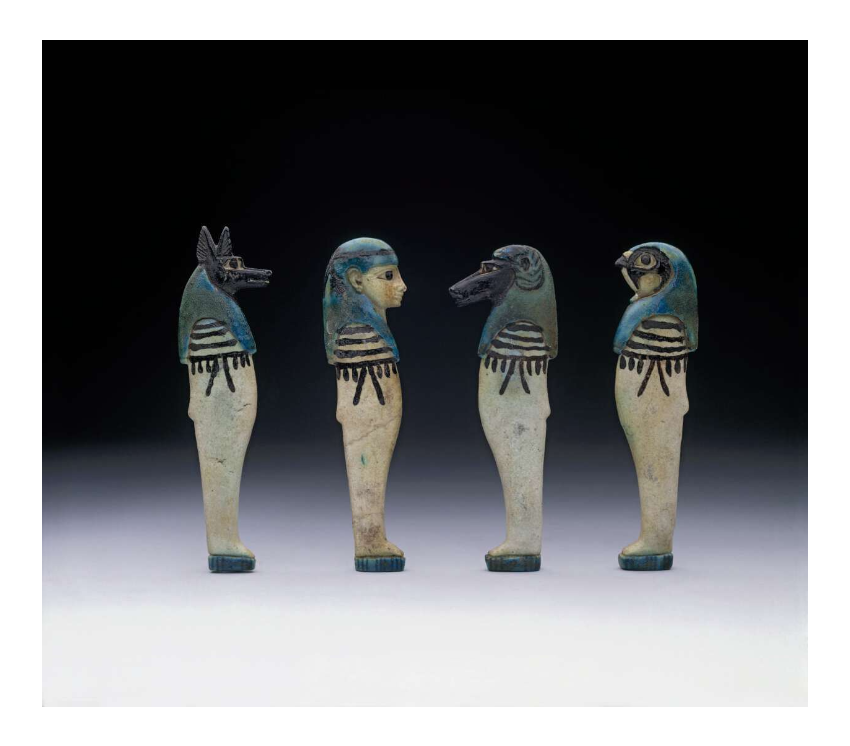 July’s Object of the Month can be viewed in the Castle’s Egyptian Room, as part of a new display for this season. It reflects the way in which the Castle’s last private owner, Denys Eyre Bower (1905 – 1977) used to display his collections. He used to cram his Ancient Egyptian artefacts into antique wooden cases, with a few handwritten labels here and there. In 1922, one hundred years ago, a 17-year-old Denys heard about the exciting discovery of Tutankhamun’s tomb by Howard Carter. It was this discovery that sparked his fascination with Ancient Egypt, and inspired him to start his own collection.

Join us on Sunday 7th August for talks, activities, and crafts in celebration of the Castle’s Egyptian collection.