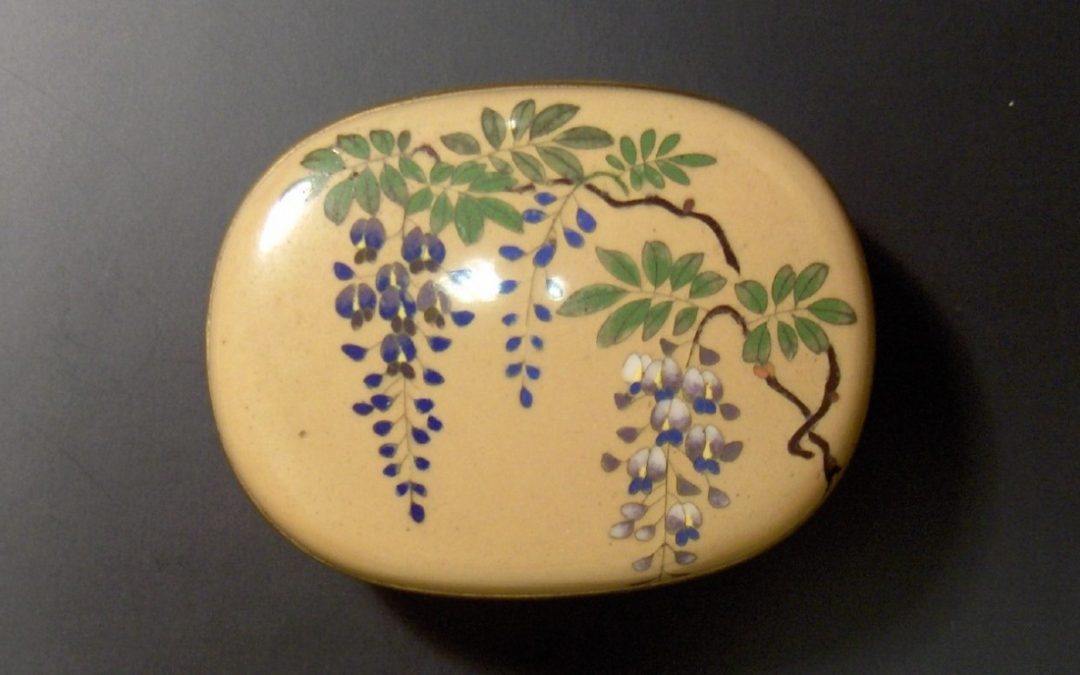 Our Object of the Month for May is this small but beautiful Japanese cloisonné box with a design of blossoming wisteria. It fits into the palm of the hand and may have been designed to hold tobacco or sweets. The delicate wisteria design showcases the skill of Meiji-period cloisonné artists. Cloisonné enamel is made by attaching thin metal wires to a metal base and applying coloured enamels in between the wires to make the design. 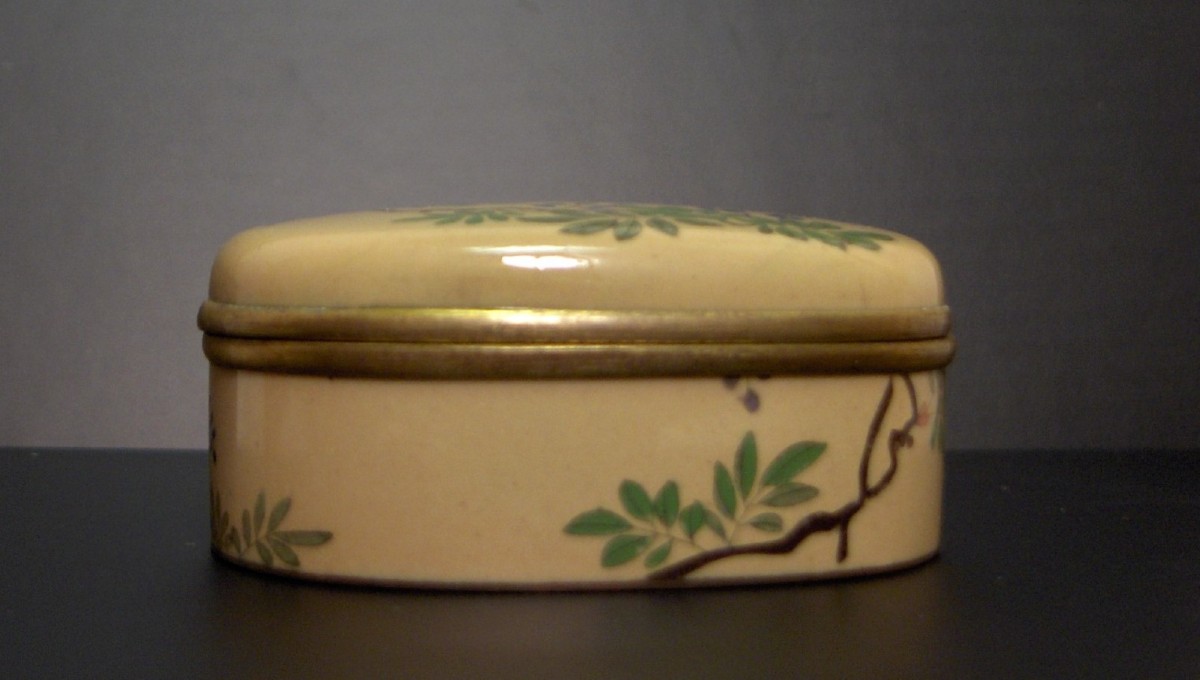 Side view of box with wisteria

The greatest cloisonné artists were able to sculpt the metal wires into different shapes and widths. Some even developed techniques to create enamel designs with the wires removed. The result was highly colourful and finely detailed cloisonné wares. Common cloisonné objects included large decorative vases and small boxes like our Object of the Month. 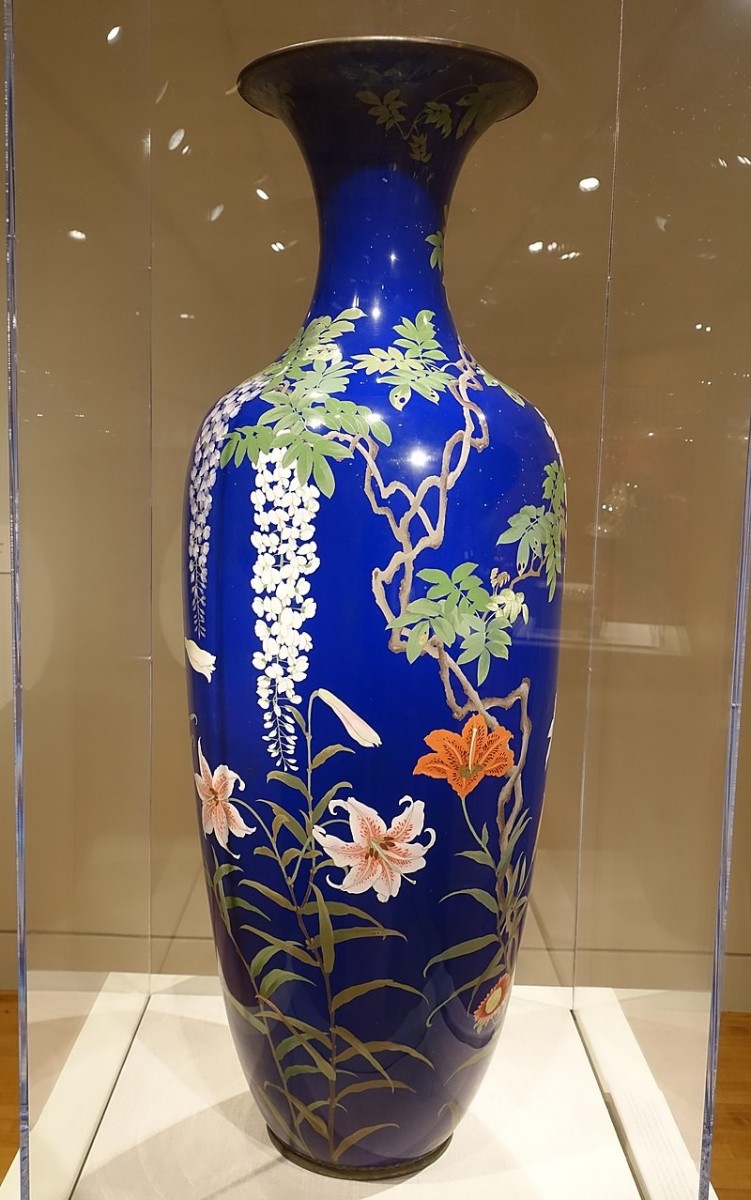 Flowers are often used as a design on Japanese decorative objects and artworks. Different flowers usually have a specific meaning and link to Japanese literature, poetry, or culture. Wisteria were a symbol of Spring as well as of nobility because traditionally commoners were not allowed to wear the colour purple. Along with the cherry blossom-viewing (hanami) tradition there also developed a tradition of viewing wisteria when it was in full bloom.

One of the most famous kabuki theater dances ‘Fuji Musume’ or ‘Wisteria Maiden’ celebrated wisteria - they were also a symbol of love. Written in 1826, the dance tells the story of a painting of a maiden wearing wisteria which comes to life to seek the love of a man. It is danced by a performer wearing an elaborate kimono with a hat or hairstyle including wisteria, against the backdrop of a wisteria tree. Kabuki plays and dances were very popular during the Edo period (1615 - 1868). They acted as a news reel or gossip column for the big cities as they were often based on real-life stories and featured the latest fashions and current topics. Kabuki actors became very famous and people would buy woodblock prints of them to decorate their homes. 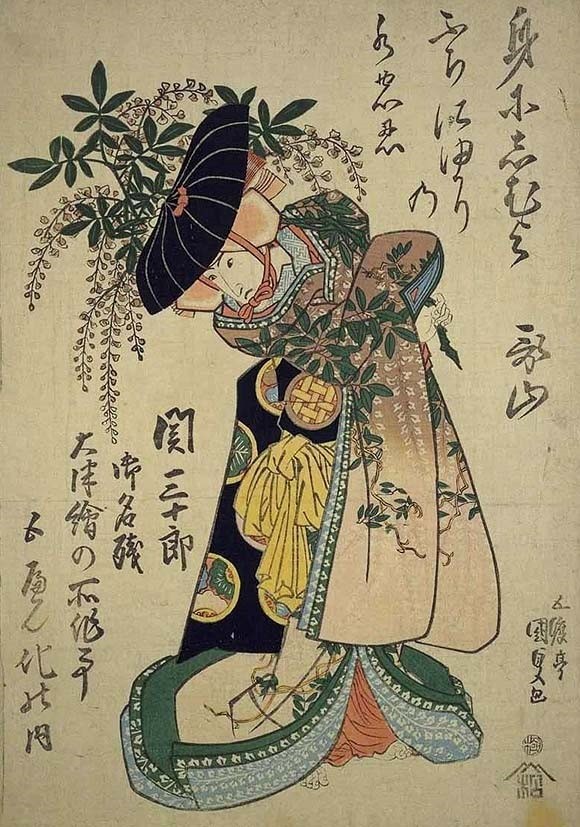 The actor Seki Sanjuro II playing the role of the Wisteria Maiden, 1826, woodblock print by Utagawa Kunisada I

The Edo period also saw a rise in demand for the cloisonné technique. Chinese cloisonné was always admired in Japan. In the 16th century it became more widely produced and used. Samurai warriors ordered sword fittings decorated in cloisonné enamel from the Hirata School founded in the 17th century.

The technique became particularly popular in the early 19th century - the story goes that a samurai called Kaji Tsunekichi (1803 - 1883) took apart a piece of Chinese cloisonné enamel he had bought to see how it was made, and recreated it himself. Samurai warriors at the time were having to find ways to supplement their income because the Edo period was the first prolonged period of peace in hundreds of years. There were no battles or wars for the samurai to fight in so whilst they were still receiving a basic salary from the government they were out of work and needed to find other things to do. Kaji Tsunekichi became confident enough to take on pupils who passed down the cloisonné techniques through generations. 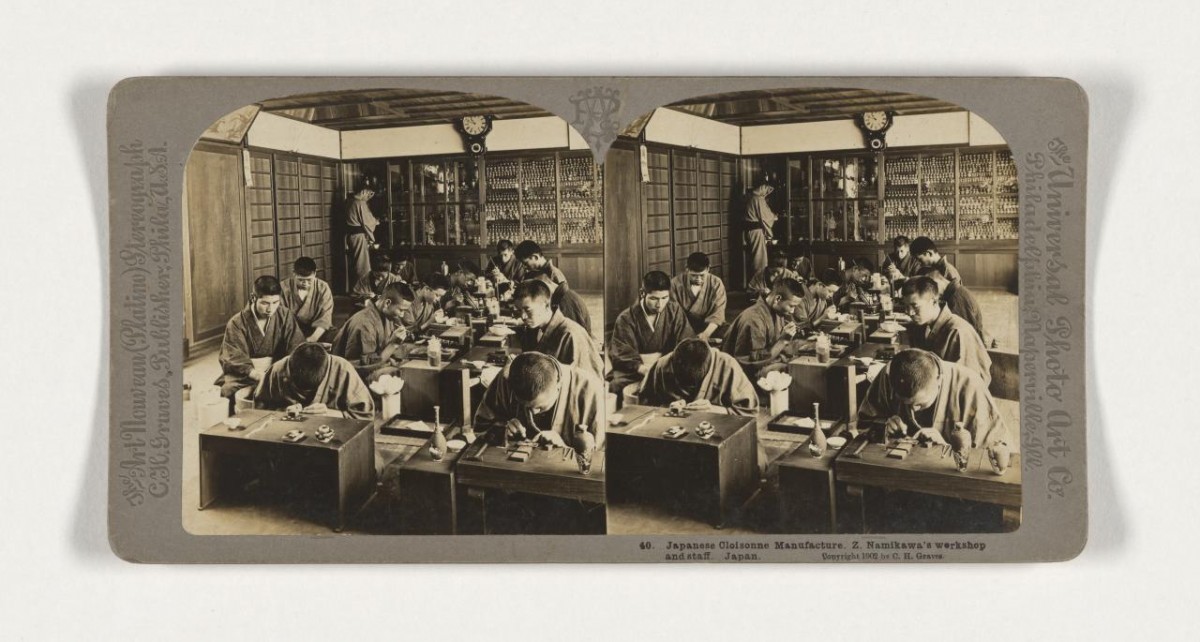 In the 1830s the first three-dimensional objects were created. The first cloisonné wares were more crudely made. By the late 19th century cloisonné had become a fine art with workshops producing very high quality decorative wares. The Meiji period (1868 - 1912) and the ‘opening’ of Japan to trade with the West brought with it new technologies and Japanese cloisonné was showcased at international exhibitions. It became a very popular export item for Western buyers. Other than wares produced for the Imperial family to give as gifts, most cloisonné wares were made for export abroad and were sold for very high prices. 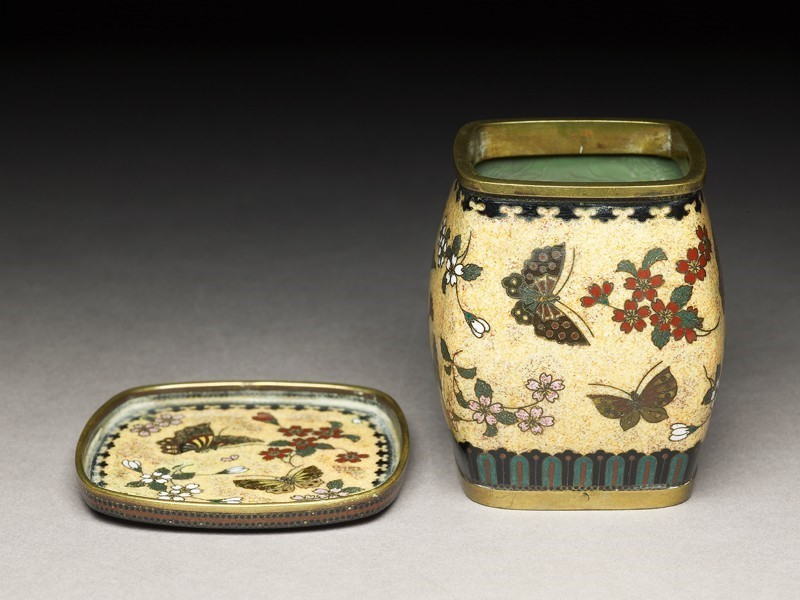 There are a number of beautiful Meiji-period cloisonné wares in Denys Eyre Bower’s collection. Denys initially was able to afford to collect Edo period artworks during the 40s and 50s because they were not very popular on the art market. However, they became more sought-after and expensive over the years. As Denys started to run low on funds, he began to only be able to afford Meiji-period objects. They were considered to be less desirable because they were made after Japan’s ‘opening’ to trade and interaction with the West. Today however Meiji wares are admired for their high quality, innovation, and imaginative designs.