Object of the Month

In this monthly blog series, our collections team write about their Object of the Month, chosen from our collection. In this blog post, curator Naomi Collick discusses this luxurious Japanese lacquer picnic set.

Just in time for heading back to school, September’s Object of the Month is this luxurious lunchbox or picnic set. This object is part of one of Chiddingstone Castle’s most artistically and historically important group of artefacts: the Japanese lacquer collection. It is known for being one of the most significant Japanese lacquer collections in private hands in the UK. Japanese lacquer wares are made by painting very thin layers of native tree sap onto a wooden object and adding decoration such as sprinkled gold powder. When dry, the sap would provide a very strong and waterproof coating.

This compact picnic set is made up of a sake bottle (rice wine), and the two top tiers are food boxes. The design is of two branches of shurochiku or Japanese miniature palm, with a ground of crushed shell. On the top of the lid are two shojo, or traditional Japanese mythical spirits known for their love of sake. They are depicted holding a sake cup and a ladle next to a large vat of sake. 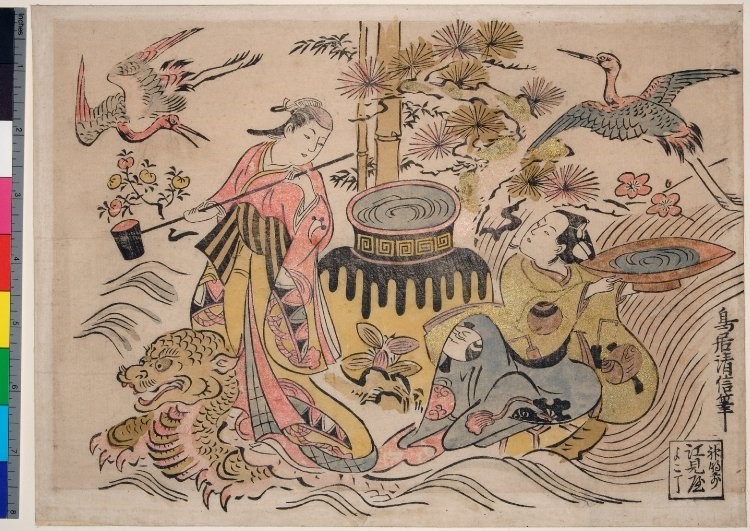 The edges of the lid are decorated with plum blossoms and a design called karakusa, or ‘Chinese grasses’, which first became popular on lacquer wares made in Japan for export. Rough-cut shell was also a popular element for export lacquer wares made for the Portuguese or Dutch markets, known as nanban wares. Designs that were common on export lacquer began to also be added to wares made for the Japanese market, as this picnic set clearly demonstrates. Export lacquer ware designs were popular because they were considered ‘exotic’ and appealed to the fascination with foreign things amongst the Japanese during the Edo period. Due to the ‘closed country’ policy of the warlord rulers in the 17th century, the only foreigners that the Japanese people were permitted to trade with and interact with were first the Portuguese, and then later the Dutch. Their fashions, mannerisms, and cultures were mingled together to create a single idea of what was ‘foreign’, and fascination with this idea was spread through artworks and popular culture. 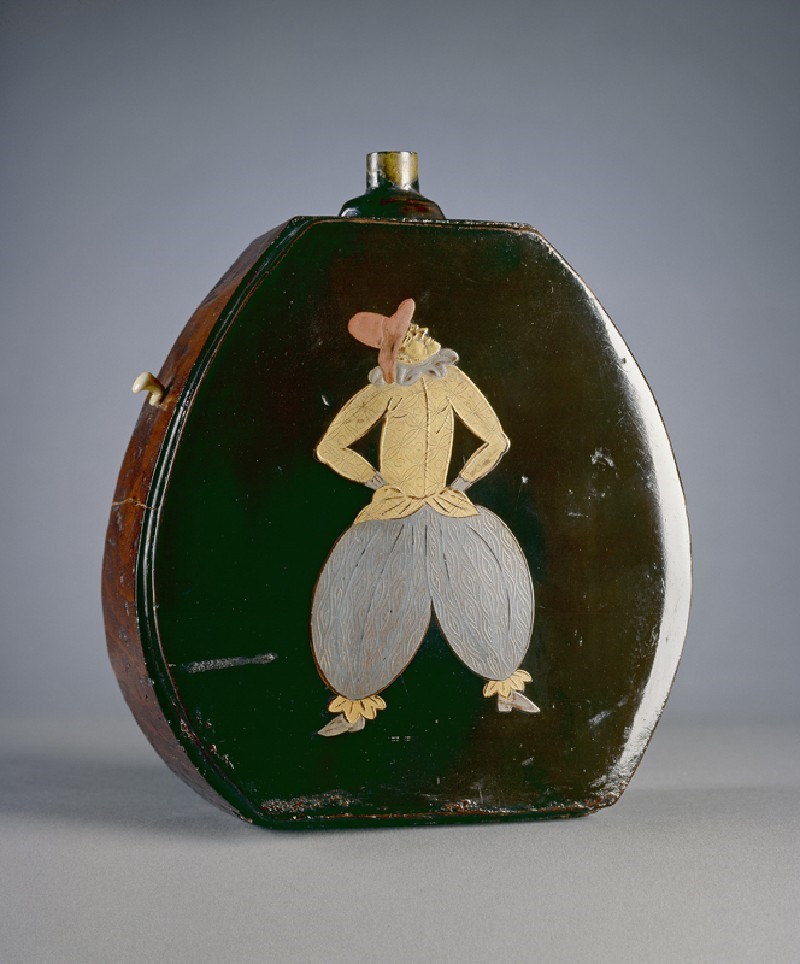 Japanese lacquer wares, as with many Japanese objects and works of art, were often decorated with seasonal designs. The plum blossom design on the rim of the lid suggests that this picnic set was made to be used in winter. Plum blossoms were considered to be one of the ‘three friends of winter’, along with bamboo and pine.

The period from the 17th to the late 19th century, known as the ‘Edo’ period after the capital of Japan at that time (which is now called Tokyo), was the first period of peace throughout Japan for hundreds of years. A series of warlord rulers had managed to unify Japan under one stable rule, which lasted for the next two hundred and fifty years. In this period of peace a market economy was able to flourish, and merchants and townspeople became the wealthiest in society. People had more free time to spend in the cities and lived more luxurious lives, and so elaborate lunches and picnics became very popular. 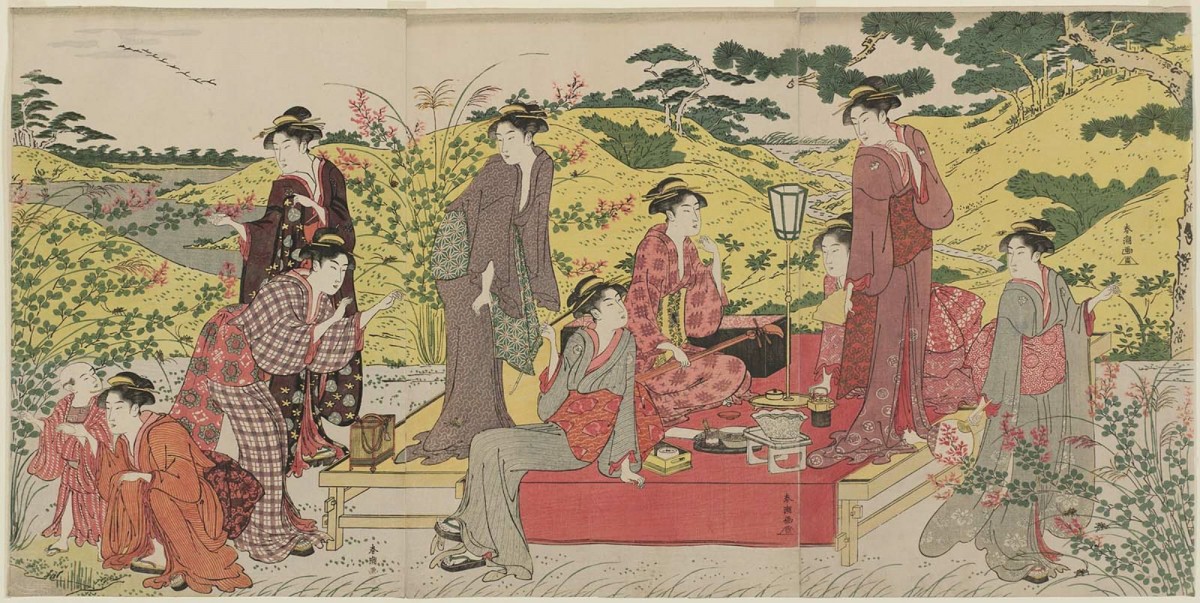 A Picnic Party in Autumn, woodblock print by Katsukawa Shuncho, 1785 - 95

A lunchbox like this one would have contained sake, rice, and an assortment of small dishes and pickles. People carried lunch boxes with them on sight-seeing trips or in order to participate in the traditional festival of hana-mi or cherry blossom viewing. Different themed and seasonal lunches would have been prepared for different occasions. Having a luxurious lunch box at a picnic or festival was a way to show off one’s wealth and status. 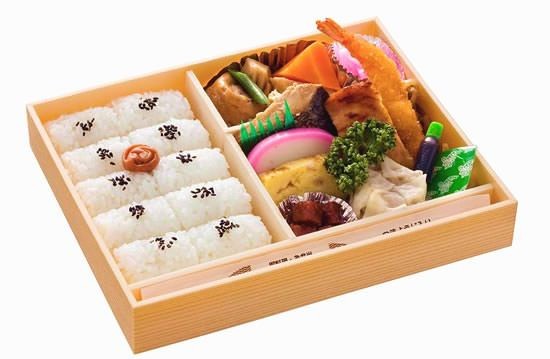 An example of a traditional Japanese lunch box meal

One of the most popular past-times for townspeople and merchants in the Edo period was Kabuki theatre. Kabuki plays were almost like a soap opera, gossip column, or news reel for people who lived the cities. They were often based on recent events and real-life drama, and some were even nicknamed ‘over-night pickles’ because they were about things that had only happened a few days ago. Attending the Kabuki theatre and supporting your favorite actors was a way for townspeople to show off their cultural taste and knowledge. The audiences were often noisy, as audience participation was encouraged and people brought their elaborate box meals with them. In the woodblock print below, attendants can be seen in the foreground waiting on wealthy theatre-goers with a stacked lacquer lunchbox, and a sake cup and pourer. 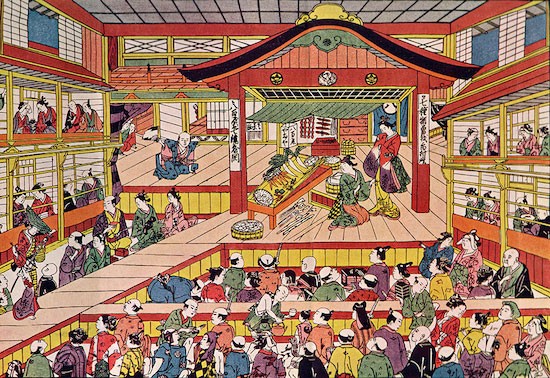 This finely decorated lunchbox would have been made for someone wealthy and of high status, who wished to show off their taste and refinement whilst having a picnic or a meal at the theatre. Lunchboxes, or bento boxes, are still very popular in Japan today, and many people still put a great deal of time and effort into making beautiful and decorative lunches to take with them to school or to work.