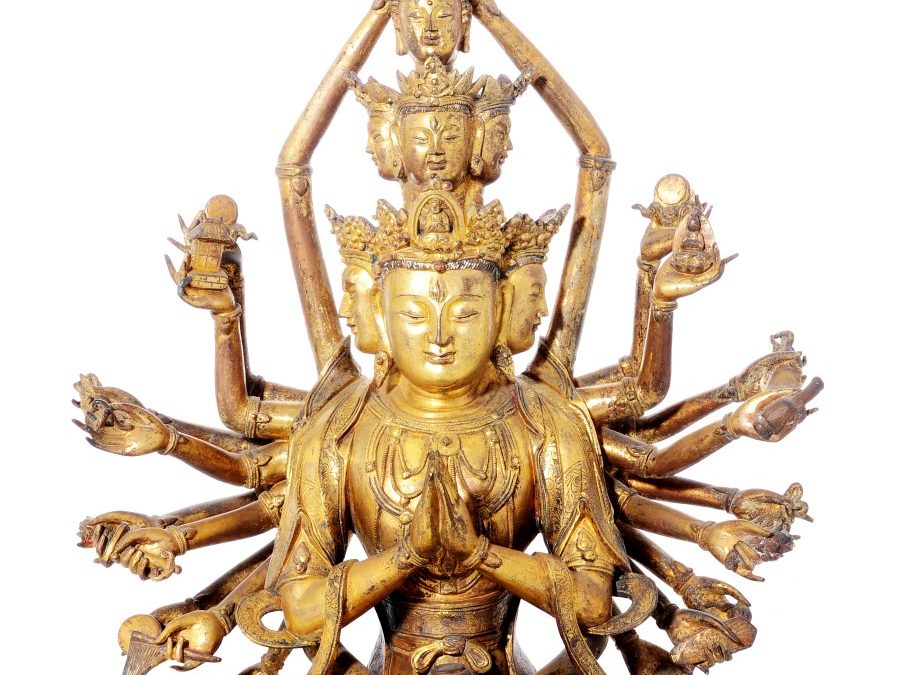 Our Object of the Month for February is this impressive statue of the bodhisattva of compassion, Avalokiteshvara. It was cast and carved in bronze and covered in gold. Avalokiteshvara is seated in a meditation pose, with his hands in different gestures and holding different symbols. His many arms and heads represent his ability to save all living beings and lead them to enlightenment (an escape from all suffering). He is wearing flowing embroidered robes and rich jewellery, and his heads are crowned.

Avalokiteshvara is depicted in many ways in different countries and cultures. He is known as the female deity Guan Yin in China, or as Chenrezig in Tibetan Buddhism. According to Buddhist texts, Avalokiteshvara is able to change into different forms, for example a monk or a child, in order to help those in need. 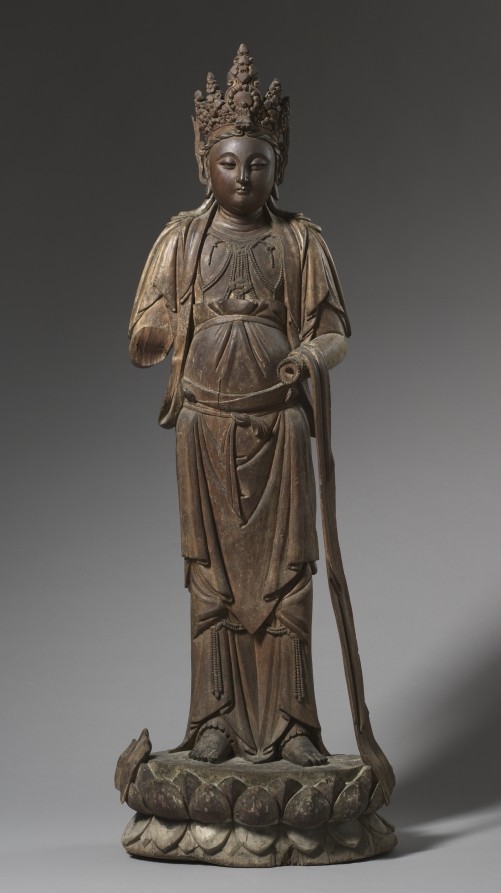 Bodhisattvas are believed to be beings (sattva) who seek enlightenment, or an awakening (bodhi) and an escape from all suffering. They have dedicated themselves to helping others do the same. Avalokiteshvara is important in many countries because of the belief that he can save living beings from suffering. His name is often translated as ‘the Lord who looks down in compassion’.

Each part of a Buddhist statue has a symbolic meaning. We can identify which Buddhist deity a statue or painting represents by what they are wearing, holding, what position they are seated in and their gestures. Statues of the Buddha are usually wearing plain monks robes. ‘Buddha’ or ‘enlightened one’ is the title given to the ancient Indian prince who is believed to have achieved enlightenment sometime around the 4th - 6th century BC and whose teachings formed the foundation of Buddhism. In contrast to bodhisattvas, the plain appearance of the Buddha symbolises the belief that he left behind his luxurious life as a prince and all attachment to wealth or possessions in order to become enlightened.

Bodhisattvas like Avalokiteshvara, however, are usually wearing rich robes and are adorned with jewellery and flowers. This symbolises their power and importance, as well as their choice to remain in the material world in order to help others achieve enlightenment. 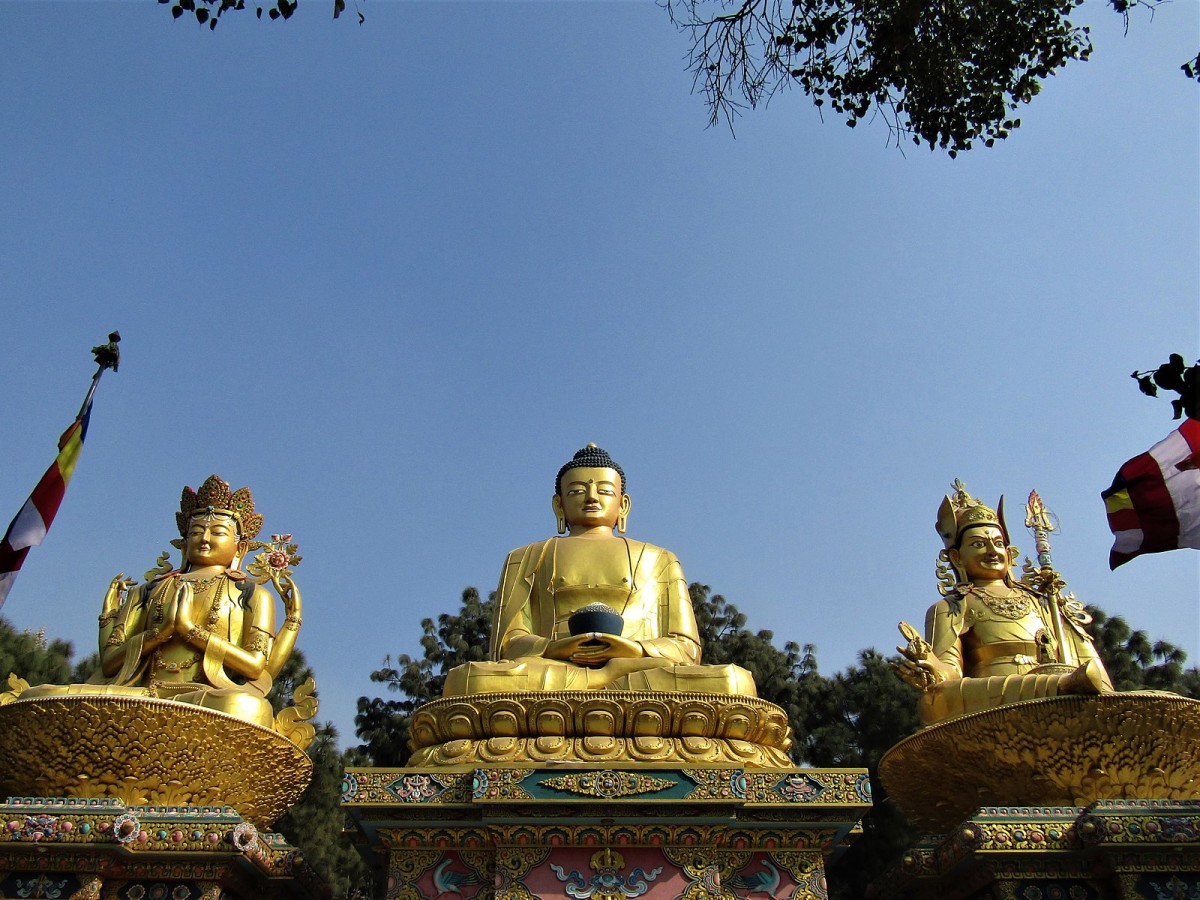 Each object that our statue of Avalokiteshvara is holding, and the positions that his many hands are in, also have a meaning. Above his head he is holding a small image of the Buddha Amitabha, who is worshipped as the deity of ‘infinite light’ and eternal life. He is holding lotus buds which symbolise enlightenment and an escape from suffering because of the way in which lotus flowers grow up out of the mud of a pond. The axe and sword ward off evil, the bottle contains a healing nectar, and he is also holding a tiny palace representing the place where the Buddha resides. 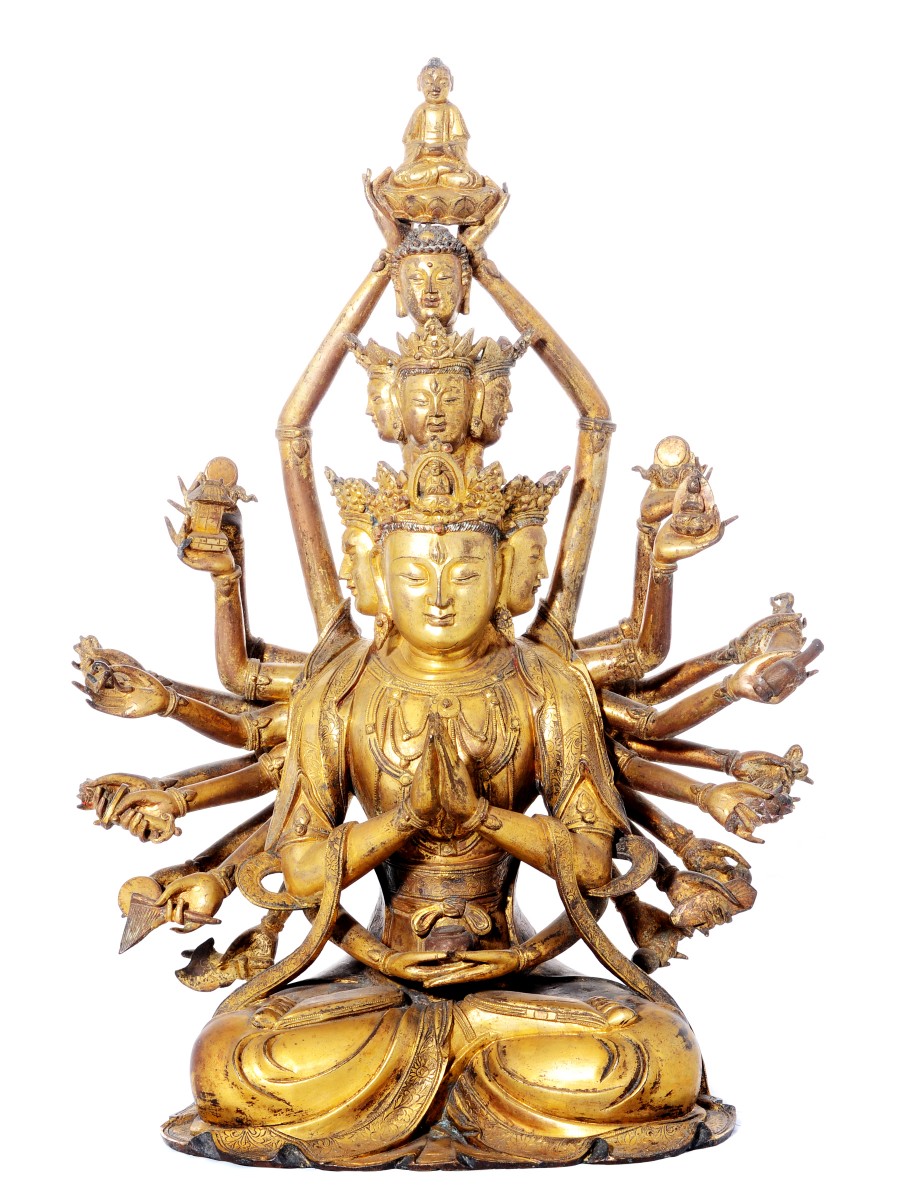 In the school of Buddhism practiced in particular in Tibet, Avalokiteshvara is often depicted as having many heads and arms. They represent his far-reaching and all-seeing powers, and there is also a Tibetan story which explains them. Avalokiteshvara made a vow to make sure that all beings achieved enlightenment. He vowed that if he did not succeed, his head and body would split into a thousand pieces. After millions of years of working towards his goal, he realised that there were still beings who were not enlightened, and in despair he shattered into a thousand pieces. Amitabha Buddha reconstructed him, giving him many arms and heads in order to improve his ability to help save all from suffering. 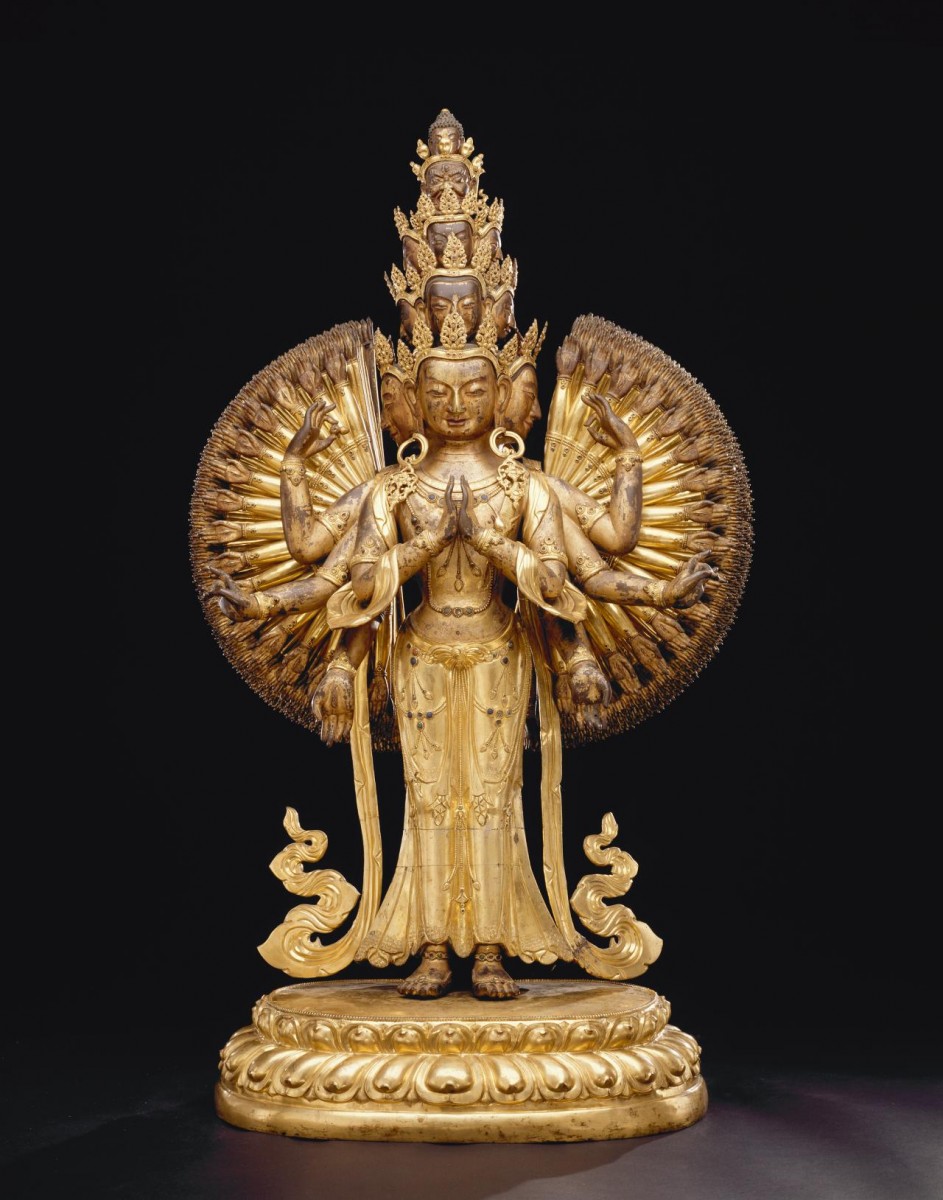 Due to its size and fine modelling, it is likely that our object of the month was made for an altar in a temple or the home of a Buddhist practitioner. It would have been designed to be viewed from below, its eye gazing benevolently down. The gold covering it would have glowed in the dim light of a temple. It would have been placed on the altar with other associated statues, as well as offerings. The main Buddhist offerings are water, light, flowers, incense, and music. It is likely that it would also have been draped in scarves and robes. Once a Buddhist statue is finished, a ceremony is carried out to make it sacred and to welcome the deity into it. From that moment it is viewed and treated with respect as if it were Avalokiteshvara. 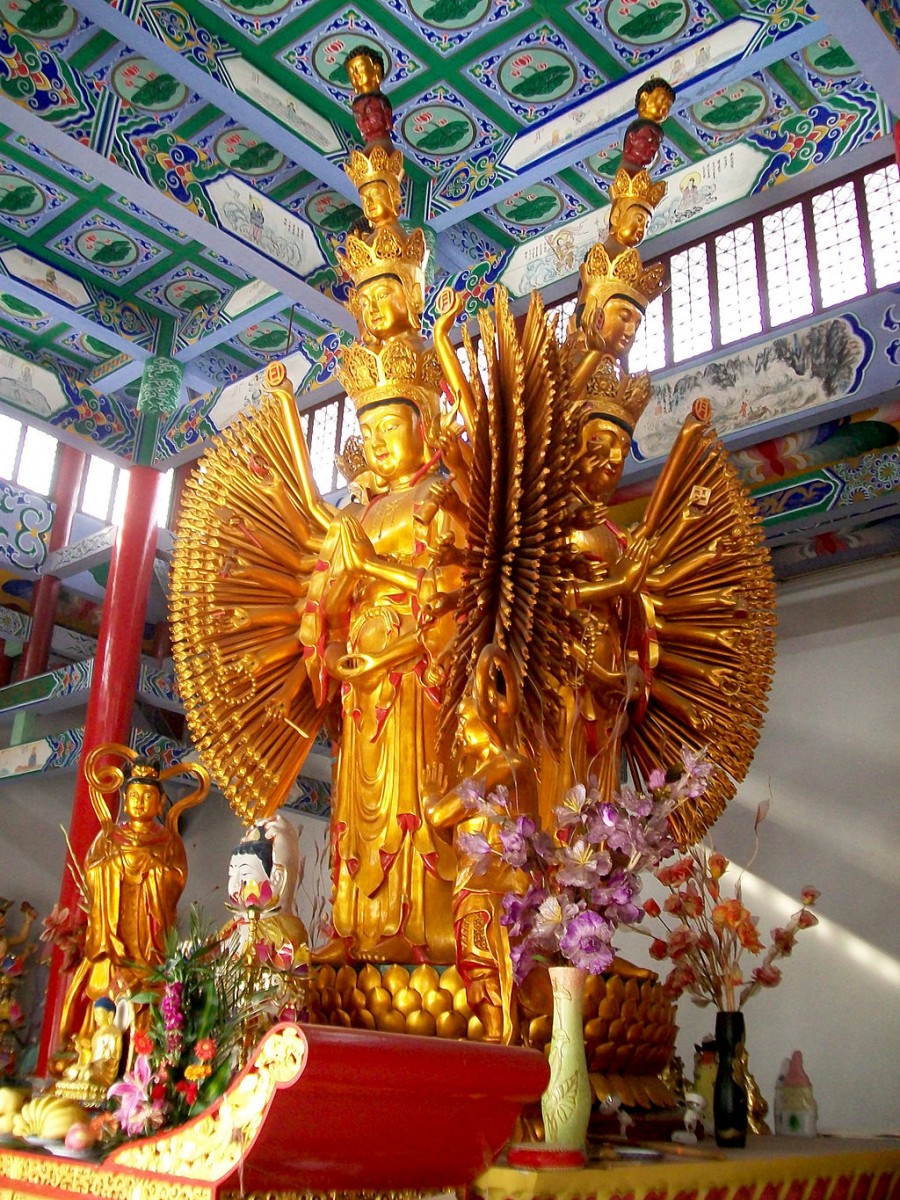